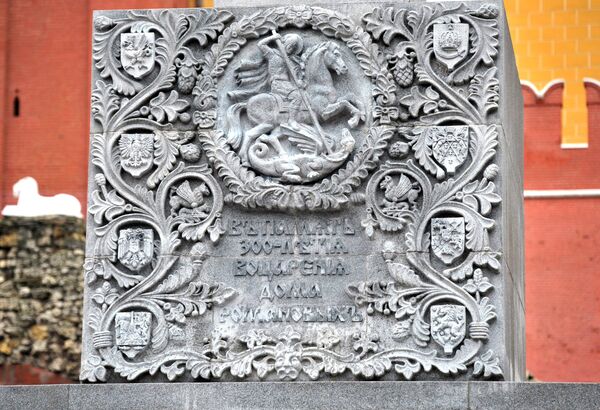 The head of the Russian Orthodox Church and senior Russian officials attended the opening of a resurrected Tsarist-era obelisk outside the Kremlin walls Monday.

MOSCOW, November 4 (RIA Novosti) – The head of the Russian Orthodox Church and senior Russian officials attended the opening of a resurrected Tsarist-era obelisk outside the Kremlin walls Monday.

The monument was originally unveiled 99 years ago to commemorate the 300th anniversary of Russia’s Romanov dynasty, but its Tsarist iconography was removed in 1918 on the orders of Vladimir Lenin and the names of Romanov emperors replaced by famous international revolutionaries.

In the renovated version unveiled Monday, criticized by some architectural preservation groups for poor quality work, the communist-era changes have been reversed.

“Today, an unjust historical action has been set right,” said Patriarch Kirill of Moscow and All Russia during the opening ceremony, which was also attended by Culture Minister Vladimir Medinsky and Sergei Ivanov, the head of the Presidential Administration, Russian media reported.

“It was done so that we could be conscious of ourselves as a people united temporally and geographically. We cannot live in separation from our history,” Patriarch Kirill said.

The monument was taken down and sent for restoration in July after officials said that its condition had deteriorated and that it was in danger of collapsing.

Architectural preservation group Arkhnadzor criticized the restoration work in a statement last week, noting that the restored monument was adorned with “false imitations of Romanov decoration.”

The opening Monday coincided with Russia’s National Unity Day, a holiday introduced by the Kremlin in 2005 to replace the communist holiday of November 7 celebrating the 1917 Bolshevik Revolution.