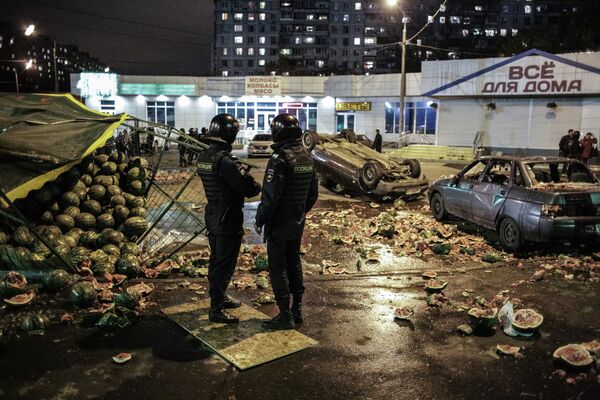 Mayor Sergei Sobyanin fired Georgy Smoleevsky, the prefect of the capital's southern district, and Viktor Legavin, the head of administration in Moscow’s Western Biryulyovo district that was the scene of violent nationalist riots.

Sobyanin said the dismissals were linked to violations found during the ensuing police raids on a local vegetable warehouse and the Sadovod market on the southeastern outskirts of Moscow. Police said the operation at Sadovod market appeared to have found illegal sales of alcohol and counterfeit goods.

Earlier this week, a number of senior Interior Ministry officials, including Alexander Podolny, the police chief of Moscow’s southern district, and Gennady Kaverin, the head of the Western Biryulyovo police department, were fired by President Vladimir Putin over the protests.

Sobyanin also reprimanded Vladimir Zotov, the prefect of the neighboring south-eastern district, over the riots and ordered him to tighten control over his territory and report violations to the mayor.

Hours after the riots, police arrested over 1,200 migrant workers in a raid on a local vegetable warehouse, starting off a major ongoing crackdown on illegal migrants in the capital.