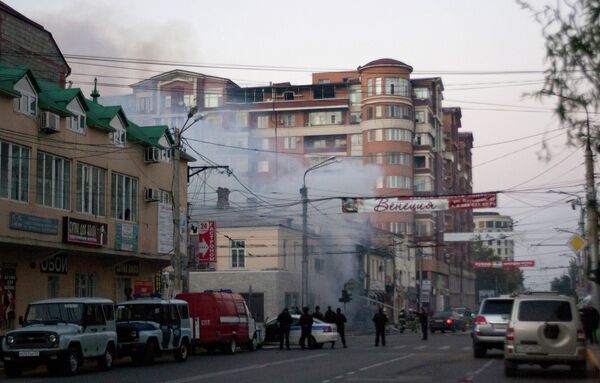 Russian investigators on Thursday named two suspects believed to have been involved in a deadly double explosion in Russia’s volatile North Caucasus republic of Dagestan.

Investigative Committee spokesman Vladimir Markin said Magomedrasul Shakhbanov, 22, and Mahmud Aliyev, 24, both thought to be members of a militant gang, were responsible for the attack on Wednesday afternoon. A search for them is ongoing.

A single explosion had the power of 4 kilograms of TNT, the republic’s police force said in a statement.

A search for additional suspects is ongoing, investigators said. Experts are examining surveillance videos from sites near the blasts.
Russia’s Interior Ministry earlier said four people could have been behind the attack.

Police said Thursday that they had a car that had apparently been stolen to commit the attack. In the vehicle, they found a man with his hands tied behind his back.

Media reports said a woman believed to have bombed a bus in the southern city of Volgograd last week was part of the same gang.

Dagestan in recent years has been the epicenter of the Islamist insurgency in Russia’s turbulent North Caucasus, plagued with violence and regular clashes between militants and federal forces.