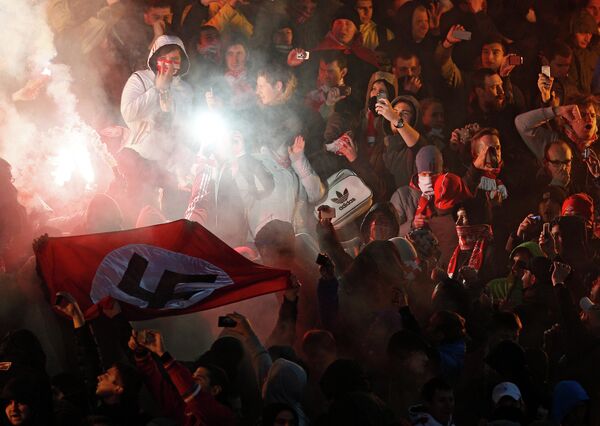 © RIA Novosti
/
Go to the photo bank
Subscribe
Police are investigating crowd trouble at a football match late Wednesday that forced the referee to stop proceedings for half an hour while authorities used water cannons to disperse belligerent fans.

YAROSLAVL, Russia, October 31 (R-Sport) – Police are investigating crowd trouble at a football match late Wednesday that forced the referee to stop proceedings for half an hour while authorities used water cannons to disperse belligerent fans.

In another worrying sign of the persistent appeal of extremist politics among Russia’s football fans, a Nazi banner was unfurled during Spartak Moscow's 1-0 win at second-tier Shinnik Yaroslavl in a Russian Cup match.

Opposing fans clashed with one another and also ripped out seats to hurl them at police during the match.

This is the latest in a string of episodes of hooliganism that have scourged Russian football.

Several supporters were arrested and no injuries were reported.

Trifonov promised to investigate the Swastika-emblazoned flag that appeared in the Spartak stand.

Russia over the summer introduced legislation put forward by President Vladimir Putin aimed at curbing misbehavior at sports events, with the Sochi 2014 Winter Olympics and the 2018 football World Cup on the horizon.

There have been more than 14,000 offenses committed at Russian sporting events over the last three years, according to the Sports Ministry.

UEFA on Wednesday handed down a partial stadium ban to CSKA Moscow for “racist behavior” by their supporters during their 2-1 Champions League defeat to Manchester City earlier this month.

After the game, Man City midfielder Yaya Toure said he had been taunted with monkey chants and asked UEFA to ban CSKA from using their stadium for European games for "a couple of years or maybe a couple of months."

CSKA will have to close one of the stands at their home Arena Khimki stadium when they host Bayern in their next Champions League fixture November 27. The sector cited in the UEFA sanctions is usually occupied by CSKA's hardcore fans, the so-called "ultras."