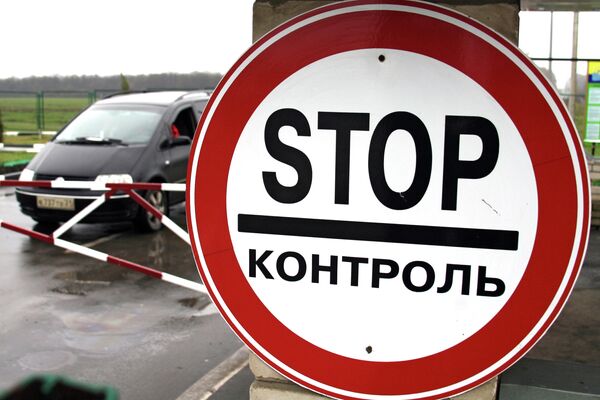 Russian customs officials said Thursday that at least 300 trucks exporting goods from Ukraine were lined up at the border as tensions between the two countries escalate.

MOSCOW, October 31 (RIA Novosti) – Russian customs officials said Thursday that at least 300 trucks exporting goods from Ukraine were lined up at the border as tensions between the two countries escalate.

Ukrainian officials blamed the delays on new customs procedures introduced unexpectedly by Russia, while Russia maintained that the changes had been widely reported in advance.

Kiev’s plans to develop deeper political and economic ties with the EU have provoked anger in the Kremlin, which has been pushing for Ukraine to join a Moscow-led Customs Union.

Lines began forming at several crossing points between Russia and Ukraine on Thursday morning, and did not lessen during the day, a spokesman for Russia’s Customs Service said.

“The situation was complicated because when the new rules were introduced, many foreign trucks… were already on the road and when they arrived at checkpoints, they were not ready to provide guarantees to ensure transit. It was these first vehicles that caused the congestion,” he said.

The Ukrainian Infrastructure Ministry said in a statement Thursday that the lines had been caused by a disagreement between Russian and Ukrainian customs officials.

The spat is the latest sign of worsening relations between Kiev and Moscow ahead of a conference in November when Kiev is expected to sign a series of free trade and association agreements with the EU.

Moscow has said that the agreements would mean new restrictions on Ukrainian goods entering Russia, while an aide to Russian President Vladimir Putin has said signing the deals with the EU would be a “suicidal” step for Ukraine.

In August, huge lines of freight cars formed at the border after Russia unexpectedly tightened customs procedures for Ukrainian exporters in what it said was a dry-run for the eventuality of Ukraine signing the agreements.

The Russian Foreign Ministry has said that travel restrictions between the two countries could be introduced, and there have been recent reports that Russia’s border guards are reinforcing the Ukrainian border with barbed wire.