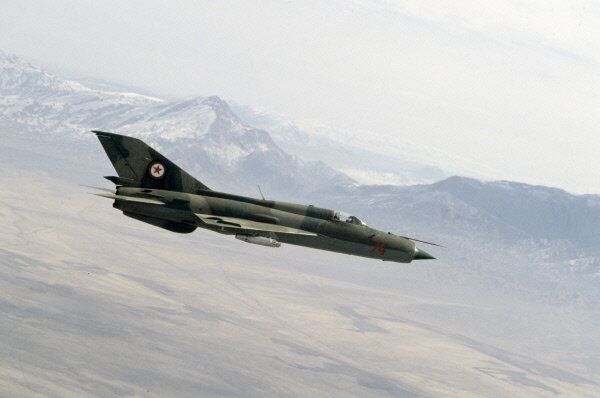 The United States covertly tested Soviet MiG fighter planes at the mysterious Area 51 site in the Nevada desert in the 1960s, including one plane secretly obtained by Israel, according to declassified US government documents published this week.

WASHINGTON, October 30 (RIA Novosti) – The United States covertly tested Soviet MiG fighter planes at the mysterious Area 51 site in the Nevada desert in the 1960s, including one plane secretly obtained by Israel, according to declassified US government documents published this week.

The first of the Soviet fighters, a MiG-21, was loaned to the United States after Israeli secret intelligence services obtained the aircraft from an Iraqi air force captain who defected in 1966, according to George Washington University’s National Security Archive, which published the declassified documents on its website Tuesday.

The US Air Force held onto the MiG-21 for more than three months in 1968 at Area 51, where specialists tested and examined the fighter to evaluate it against US fighter planes in air-to-air combat and to develop new tactics to defeat the Soviet jet, according to the documents.

The operation to study the MiG-21 was designated “Fishbed-E” and concluded that the Soviet fighter has “excellent operational capability in all flight regimes,” according to one of the declassified US Department of Defense documents.

US specialists noted, however, some deficiencies, including poor forward and rearward visibility and “limited” performance when flying below 15,000 feet (4,572 meters).

The aircraft was subsequently returned to the Israelis in April 1968.

Area 51 was also home to two efforts to evaluate the MiG-17 in the 1960s, according to the documents. Those operations, designated “Have Drill” and “Have Ferry,” including flying the MiGs on a combined total of 224 sorties.

For decades Area 51 has been the subject of countless conspiracy theories, including the existence of extraterrestrials, alien autopsies and whether the site even existed at all.

But US Central Intelligence Agency (CIA) documents declassified in August acknowledged that Area 51 did indeed exist and revealed that it was used as a base to test U-2 and other spy planes.

Those documents were also published by George Washington University’s National Security Archive after it obtained the report in response to a Freedom of Information request filed in 2005.