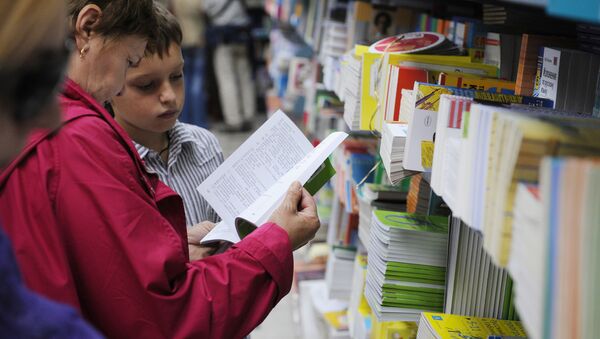 A state commission Wednesday issued a draft outline for a line of unified history textbooks to be published in Russia on the Kremlin’s order.

MOSCOW, October 30 (RIA Novosti) – A state commission Wednesday issued a draft outline for a line of unified history textbooks to be published in Russia on the Kremlin’s order.

The draft will be filed Thursday with President Vladimir Putin, who ordered its creation last February, said a spokesman for the Russian Historical Society.

A state tender will then be announced for writing textbooks based on the outline, though it remained unclear whether they will be ready in time for the new academic year in September 2014.

More than 100 history textbooks are currently certified for use in Russian schools.

Putin’s order for a unified textbook outline prompted speculation that the Kremlin wants more propaganda in schools, possibly to justify its own authoritarian tendencies.

However, historians and political experts previously interviewed by RIA Novosti denied this, saying the Kremlin had no single vision of history and did not want to stir up any controversy by radical revisions of Russia’s past.

The final draft raised some questions, particularly over the omission of anti-Kremlin tycoons Mikhail Khodorkovsky and Boris Berezovsky from the mandatory list of names to know in the section on post-Soviet history.

But on the whole, the outline offered no significant revision of the existing curricula in Russian secondary and high schools.

The 80-page document focused on Russia’s similarities and differences with Europe in pre-revolutionary times, dwelled on Stalinist repression and mentioned the strategic failures of the postwar Soviet leadership. World War II, a staple of state ideology to this day, remains a major topic.

Post-Soviet history, while included, is the only section that came largely without policy analysis.

The draft also offered a list of 20 topics formally recognized as controversial and allowing for different interpretations at the teacher’s discretion.

The topics range from the Norsemen’s place in the creation of the Russian state to the role of Stalin, the costs of World War II and political and economic situation in the country in the 2000s.

The Russian government and society as a whole is sensitive to the portrayal of the nation’s often tragic and violent history.

In August 2009, then-President Dmitry Medvedev proposed introducing a standard history textbook in an apparent bid to head off controversial interpretations of Russia’s past.

In recent years, a number of British and American historians have caused uproar in Russia with claims that the Red Army committed mass atrocities in World War II, notably Antony Beevor’s 2002 book “Berlin.”