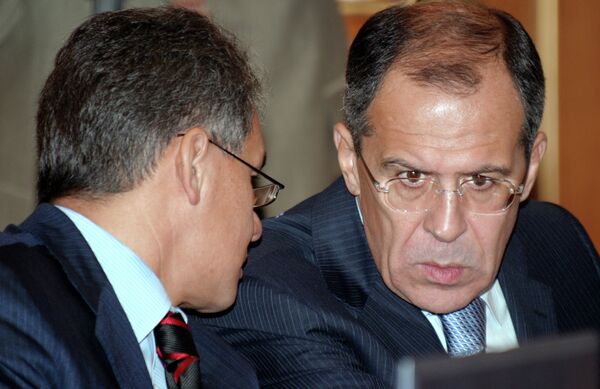 Moscow plans to take issue with the placement of US missile defense elements in Japan during an upcoming ministerial meeting in Tokyo, a Russian deputy foreign minister said Wednesday.

MOSCOW, October 30 (RIA Novosti) – Moscow plans to take issue with the placement of US missile defense elements in Japan during an upcoming ministerial meeting in Tokyo, a Russian deputy foreign minister said Wednesday.

“We have many questions regarding the deployment of elements of a US missile defense network in Japan,” Deputy Foreign Minister Igor Morgulov told RIA Novosti.

“We are ready to share our assessment and carefully listen to what our Japanese colleagues have to say about the subject,” he said.

Russia has been keeping a close eye on US moves to deploy missile defenses around the arc of the South China Sea in addition to the disputed European missile shield.

Washington and Tokyo agreed in October to broaden their military collaboration for the first time in 16 years.

As part of the agreement, the US will deploy a new X-band missile-defense radar at the Kyogamisaki airbase in western Japan’s Kyoto prefecture to join an existing AN/TPY-2 radar in Japan’s northern Aomori prefecture.

Some reports suggest that the US Missile Defense Agency and the US Pacific Command are considering a third such radar somewhere else in Southeast Asia, possibly in the Philippines.

Washington is also planning to expand the grouping of Aegis-equipped US warships that patrol international waters in the region.

All these moves could be seen as a sign of Washington's increased military, economic and diplomatic focus on Asia, according to Russian military and political experts.