Russian Women In Search of a Cause 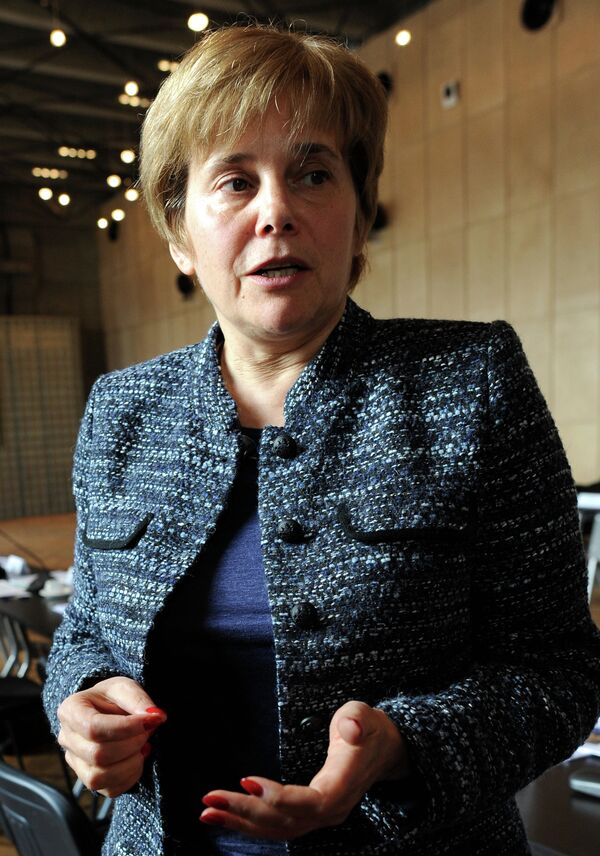 © RIA Novosti . Sergei Piatakov
/
Go to the mediabank
Subscribe
International
India
Africa
The first shoots of gender equality came to Russia with the Soviet Union, when women were given an active role in building up the Communist system.

DEAUVILLE/MOSCOW, October 29 (RIA Novosti) − The first shoots of gender equality came to Russia with the Soviet Union, when women were given an active role in building up the Communist system.

In modern Russia, women have increasingly adopted a new role − militating for human rights, outside the protection of the state.

This evolving role of women in Russian public life was a centerpiece of discussions at the the 2013 Women’s Forum for the Economy and Society held in the French town of Deauville earlier this month.

“Clearly, you have a history and tradition in Russia which actually promoted the equality of women as a state policy, but … there is a paradox as there is today a society that has a very patriarchal system,” said Florence Tercier Holst-Roness, who runs Issues Affecting Women Program at the Geneva-based Oak Foundation.

In the Soviet Union, women were provided state-funded child care, abortion rights and gained access to professions and trades that had in earlier eras been closed off to them.

“The strategy for survival in the Soviet Union, in a way, was not fighting for rights, but creating a private, independent space,” said Irina Prokhorova, founder of the NLO publishing house.

That struggle remains current to this day, but has also broadened to encompass wider aims.

“I think the main problem now is not even with the [freedom of the] press, but educating people, telling them about their rights – that they really have rights,” said Prokhorova, who also heads the Mikhail Prokhorov Foundation, a charity named after her billionaire brother.

Grassroots groups and social activism have picked up steam over the past several years, although very few of those initiatives focus on women.

In 1993, the ANNA center for prevention of domestic violence against women was founded by Marina Pisklakova-Parker, who still chairs the organization.

The center managed to create the country’s first shelters and a hotline for abused women. It remains one of the few organizations focusing on women’s rights.

Russia boasts a wide range of non-governmental rights groups run by women, including the local branches of the Human Rights Watch and Transparency International, as well as the country’s leading organization helping migrants and refugees, Civil Assistance, among others.

Indeed, although the “Being a Russian Woman” panel in Deauville was ostensibly devoted to discussions on the contemporary role of women in Russian society, talk soon turned to the human rights situation in the country, which is where many women are focusing their attentions.

Economist-turned-activist Irina Yasina said activism has occupied most of her time for more than a decade.

“Every morning I see letters in my Facebook or LiveJournal, or an email from disabled people from all over Russia … asking for help,” said Yasina, who also work as a commentator for RIA Novosti.

Yasina once headed the Open Russia Foundation for civil rights, established by oil tycoon Mikhail Khodorkovsky, who was later jailed on economic-related charges that are widely seen as politically motivated.

And yet, Russia still doesn’t have any law protecting women from domestic violence.

“Right now there is no legislation to protect women’s rights, said Mari Davtyan, a lawyer with the Moscow Legal Center, who is involved in a working group to promote a bill on domestic violence in the State Duma, the lower house of parliament.

She expects the bill to be introduced next year, but admits that it will take longer to see it being implemented.

Last year, normally marginal discussions on feminism broke into the mainstream with the furore surrounding the all-female Pussy Riot punk band, whose anti-Kremlin performance in Christ the Savior Cathedral in Moscow landed them in jail.

The episode has served to some extent to intertwine the diverging conversations about political rights and feminist issues.

The original stunt was harshly condemned by the government and the powerful Orthodox Church, and has thereby served as a possible setback for feminist causes.

Two of the band members, both of whom have young children, are currently serving two-year prison sentences.

The conservative climate in Russia at the moment is such, however, that most approve of the jailing, suggesting that little progress has been made in improving rights across the board.