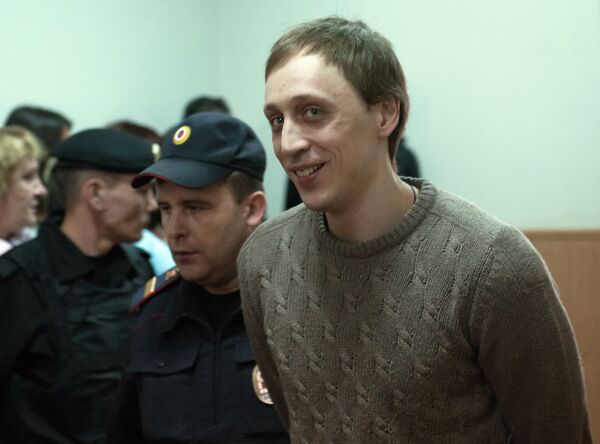 Sergei Filin, 42, suffered third-degree burns to his face and eyes on January 17 when a masked assailant threw concentrated acid in his face outside his apartment building in Moscow.

Dmitrichenko, 29, has been in pre-trial detention since he was arrested in March, when police said he had confessed to organizing the attack but claimed he did not know that the perpetrator planned to use acid. The assault was reportedly motivated by Dmitrichenko's desire to avenge his girlfriend, a fellow dancer who had been passed over by Filin for key roles in the Bolshoi's productions.

Together with Dmitrichenko, two other men were arrested in March in connection with the attack: Yury Zarutsky, the alleged assailant, and Andrei Lipatov, who reportedly drove Zarutsky to Filin’s apartment building to carry out the attack. All three face 12 years in prison if convicted.

Zarutsky pleaded guilty Tuesday to carrying out the attack, but said he had acted alone. Lipatov pleaded not guilty.

Filin, himself a former dancer, returned to Moscow in September after undergoing more than 20 operations over a period of six months in a German hospital. Doctors there said that the artistic director’s eyesight had improved significantly from his condition immediately after the attack: After losing over 90 percent of his vision in his left eye and becoming totally blind in his right eye, Filin now has 80 percent of his left eye vision restored and can distinguish large objects with his right eye.

Filin has suggested that the aim of the attack may have been to remove him from his position as artistic director and to destroy the prestigious Moscow ballet company's reputation.

The trial at Moscow’s Meshchansky district court is due to resume Thursday.