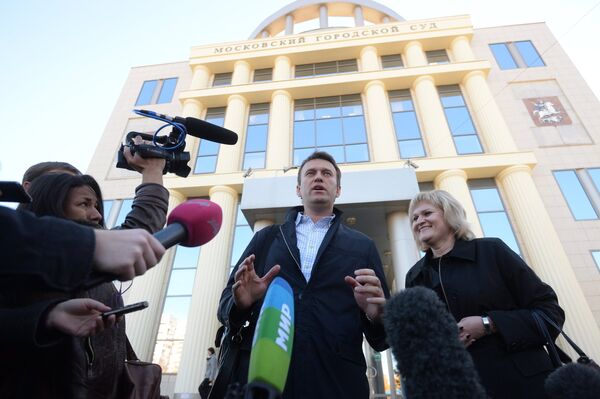 The Investigative Committee said in a statement that Navalny and his brother, Oleg, swindled Yves Rocher out of 26 million rubles ($812,000) and laundered 21 million rubles.

The prospect of further legal troubles for the outspoken Kremlin critic follows a mild reprieve in mid-October when a court in the city of Kirov revoked a prison term for separate fraud charges, instead imposing a suspended sentence.

Moscow City Court earlier this month turned down a motion by the Navalny brothers to dismiss the case against them.

The Investigative Committee had in December 2012 accused the Navalnys of embezzling over 55 million rubles from a trading company that was subsequently revealed to be the Russian operation of French cosmetic giant Yves Rocher.

Oleg Navalny is accused of using his senior position with Russia's Postal Service to manipulate Yves Rocher into entering into a contractual agreement for cargo mail transportation with a private mailing service in which Alexei Navalny was registered as founder.

The Navalnys’ lawyer, Olga Mikhailova, has said there is no documentary evidence to prove her clients’ guilt.

Another lawyer, Vadim Kobzev, compared the charges to the previous case against Alexei Navalny.

“Navalny is accused of two counts of fraud. Just like the previous case, the charges artificially criminalize normal business activities, treating a contract as a means of fraud and profit as inflicted damage,” he said.

A court in the Kirov region on October 16 granted Alexei Navalny a suspended five-year sentence on separate embezzlement charges. The decision marked a softening of a prison term ordered in July, but left Navalny open to arrest should he engage in the defiant political activity that has become his trademark. Navalny is also banned from running from office for the foreseeable future.

Alexei Navalny, 37, a lawyer and anti-corruption blogger, has risen to become one of the most prominent faces of the Russian opposition movement since the start of mass protest rallies in Moscow in late 2011.

He ran for Moscow mayor last month, losing to the Kremlin-backed incumbent, but boosting his public exposure through a vigorous grassroots campaign. He gained just over 27 percent of the vote, well above what initial polls suggested he would get.

Updated with quote from Kobzev