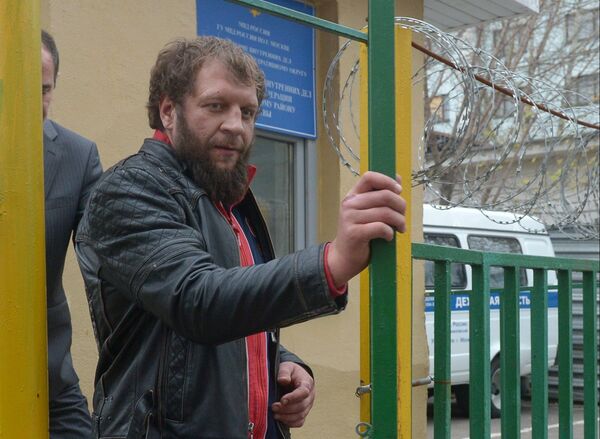 MOSCOW, October 28 (R-Sport) – Russian mixed martial arts fighter Alexander Emelianenko remains under investigation by Moscow police after a cafe brawl, the authorities said Monday, even though Emelianenko's lawyer had claimed the matter had been settled.

A 63-year-old man was hospitalized with multiple injuries last Wednesday following a brawl in a cafe in southeastern Moscow. Emelianenko was later taken in for questioning by police but released after filing a counter-claim stating he was only defending himself.

“The complainant, who is already not a complainant, and Alexander made peace and shook hands,” Emelianenko's lawyer Kakhaber Dolbadze said. “Both filed a petition to close the case and we are waiting for the corresponding decision.”

However, Moscow police told RIA Novosti they were still investigating the cafe brawl and that it had been passed from local officers to the capital's central police command.

"All applications and requests that have been submitted by the parties to the conflict and their lawyers will be added to the materials in the criminal case file and considered in the inquiry process," police said in a statement.

Following last week's incident, MMA promotion Legend terminated its contract with the 31-year-old Emelianenko, stating he was "unprofessional" and unprepared for a bout against Croatian fighter Mirko Filipovic on November 8. He was removed from the card and replaced with another Russian, Alexei Oleinik.

Emelianenko has a 23-6 career win-loss record. He is the younger brother of former MMA champion Fedor Emelianenko.