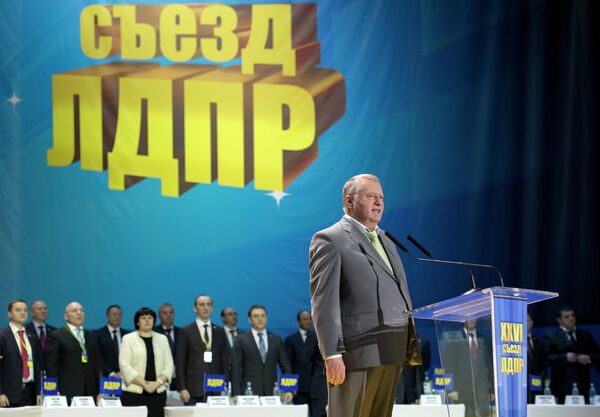 © RIA Novosti . Ilya Pitalev
/
Go to the photo bank
Subscribe
A senior member of Russia’s nationalist LDPR party expressed concern Monday for the safety of the party’s Chechen division head, who pledged to dissolve the branch over disparaging comments made about the region by the party’s outspoken leader, Vladimir Zhirinovsky.

MOSCOW, October 28 (RIA Novosti) – A senior member of Russia’s nationalist LDPR party expressed concern Monday for the safety of the party’s Chechen division head, who pledged to dissolve the branch over disparaging comments made about the region by the party’s outspoken leader, Vladimir Zhirinovsky.

Alexei Didenko, a member of the LDPR’s Supreme Council, said that party leaders had serious reason to believe that Adlan Shamsadov, head of the party’s branch in Russia’s southern republic of Chechnya, may have been coerced under threat of violence or even death into making the statement about closing the branch.

“We believe there are grounds for conducting serious investigations into those who are forcing our party members to give up their ideology,” Didenko said, claiming that the party couldn’t locate Shamsadov and that it would ask Russia’s Federal Security Service (FSB) to help track him down.

The deputy added that he had spoken to Shamsadov over the phone, but there was a “strange noise” in the background, and he was unable to communicate with him normally. Didenko didn’t elaborate on who he believed to be behind the alleged threats to the party’s regional head, or what their aim might be.

The Chechen leader's press secretary Alvi Karimov on Monday called " a complete lie" the LDPR’s claim that the promise to dissolve the division had been made under threat of physical violence, according to Ekho Moskvy radio station.

Shamsadov announced on Sunday that the Chechen division of over 2,000 members would withdraw from the party because of controversial comments about Russia's North Caucasus region, of which Chechnya is part, made by LDPR leader Zhirinovsky last week.

Zhirinovsky, a flamboyant politician known for making inflammatory and headline-grabbing statements, suggested controlling the birth rate in the North Caucasus and closing the region off with barbed wire as a way to combat terrorism in an interview with Russia’s Channel One TV station.

His comments sparked outrage among politicians in the North Caucasus and Moscow. Sergei Mitrokhin, leader of the liberal Yabloko party, has sent an official request to the Investigative Committee calling for Zhirinovsky to be investigated for inciting hatred, Yabloko said Monday.

Shamsadov said it was impossible for the LDPR party’s Chechen branch to continue under a leader who “has compromised himself as a bearer of fascist ideology” in his statement pledging the division’s dissolution.

Didenko stressed Monday that regional branches can only be closed down by a party congress or by the LDPR’s Supreme Council, and that the party still hasn’t received any official application from its members in Chechnya to shut down the office.