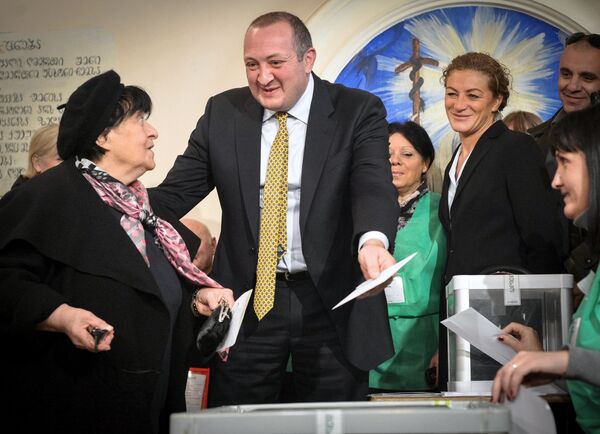 © RIA Novosti . Aleksei Kudenko
/
Go to the photo bank
Subscribe
With ballots counted at the majority of Georgia’s polling stations, an opponent of outgoing president Mikheil Saakashvili has a solid lead in the presidential vote, electoral authorities said on Monday.

With 100 percent of votes counted, Giorgi Margvelashvili from the anti-Saakashvili Georgian Dream party received 62.11 percent of the vote.

The presidential runner-up is Davit Bakradze of Saakashvili’s United National Movement, with 21.73 percent of the vote.

Both of the top candidates pledged to continue policies of integration with the European Union and NATO, as well as improve ties with Russia that greatly soured under Saakashvili.

“There will be no aggression on our part. Georgia will be constructive toward Russia,” Margvelashvili said. However, he added that his country would not recognize breakaway provinces Abkhazia and South Ossetia as independent nations.

The dispute over the two regions has been a sticking point in relations between Moscow and Tbilisi ever since the provinces proclaimed independence from Georgia in the early 1990s.

Tensions in the area eventually led to a brief war between Georgia and Russia in August 2008. In the wake of the war, Moscow recognized South Ossetia and Abkhazia as independent states and pledged full assistance to both republics.

Twenty-three candidates took part in Sunday’s election, but the presidential position is less powerful than it was under Saakashvili after laws passed earlier this year diluted presidential powers.

Georgia’s Central Election Commission chief Tamar Zhvania praised the elections as “yet another success by the people of Georgia.”

“It is very important that everything was peaceful, with no serious violations or incidents,” she said.

The European Union congratulated Margvelashvili on being elected.

Georgian Prime Minister Ivanishvili told journalists in Tbilisi on Monday that the name of his successor as premier would be known on Saturday. He said earlier that he would resign after the presidential election.