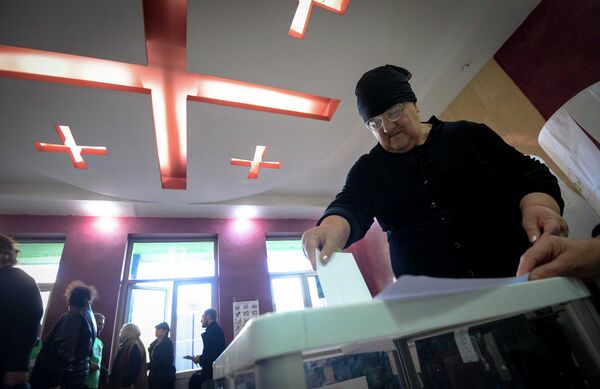 Voters in Georgia headed to the polls Sunday to elect a replacement for outgoing president Mikheil Saakashvili, who is leaving office after two terms at the helm of the small former Soviet nation.

TBILISI/MOSCOW, October 27 (RIA Novosti) – Voters in Georgia headed to the polls Sunday to elect a replacement for outgoing president Mikheil Saakashvili, who is leaving office after two terms at the helm of the small former Soviet nation.

Saakashvili rose to power on the back of a popular uprising in 2003 and earned massive popularity by pursuing an aggressive anticorruption campaign, but has latterly lost his appeal, in part since a disastrous war with Russia in 2008.

The stakes in the election have been markedly reduced since amendments to the constitution earlier this year that diluted presidential powers.

Twenty-three candidates are on the ballot in the ex-Soviet nation in the South Caucasus, which counts 3.5 million registered voters.

Giorgi Margvelashvili of the anti-Saakashvili Georgian Dream party, which won parliamentary elections in October, is universally tipped to easily win the election, although he will need to garner more than 50 percent of the vote to avoid a runoff.

Polling stations have been set up abroad, including in Afghanistan, where about 1,500 Georgian troops serve in the NATO-led International Security Assistance Force mission.

The sizeable Georgian diaspora in Russia has no chance to vote, however, because Moscow has severed its diplomatic ties with Tbilisi since the 2008 war over Georgia’s breakaway provinces of Abkhazia and South Ossetia.

Both front-runners pledged to continue Saakashvili’s policy of integration with the European Union and NATO, and have indicated willingness to improve ties with Russia, which have soured under the outgoing president.

Columbia Law School graduate Saakashvili enjoyed broad public support early in his term due to his successful reforming of the state bureaucracy and police.

But his approval rating stood at 22 percent this year, compared to 74 percent in 2011, according to a Gallup survey from July.

Saakashvili was not allowed to run for a third term, although there has been speculation that he planned to remain in power as prime minister, capitalizing on reforms that gave more power to the parliament and the executive wing.

That scenario was dashed in October, when the United National Movement was trounced in parliamentary polls by the Georgian Dream, led by tycoon Bidzina Ivanishvili.

Ivanishvili, whose fortune was this year put by Forbes magazine at $.5.5 billion, became prime minister after the election. He has said he plans to quit politics after the presidential vote.