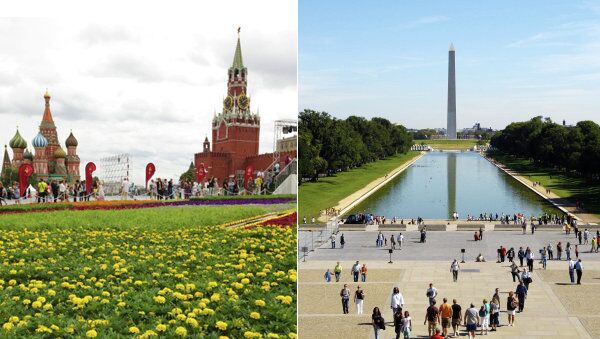 © RIA Novosti
Subscribe
The number of Russians seeking asylum in the United States spiked by nearly 16 percent this year, a jump that comes amid anecdotal evidence that more and more Russians are petitioning for stateside sanctuary based on claims of persecution due to their sexual orientation.

WASHINGTON, October 24 (By Carl Schreck for RIA Novosti) – The number of Russians seeking asylum in the United States spiked by nearly 16 percent this year, a jump that comes amid anecdotal evidence that more and more Russians are petitioning for stateside sanctuary based on claims of persecution due to their sexual orientation.

The United States received 837 asylum applications from Russian nationals in the 2013 fiscal year ending Sept. 30, up from 722 applications the previous year and the most since 2002, according to data provided to RIA Novosti by US Citizenship and Immigration Services (UCIS).

Many Russian asylum claims cite persecution back home due to race, religion or political convictions, but it is impossible to state with certainty what has driven the increase. UCIS could not provide a breakdown on the types of persecution claims made by the applicants, and privacy laws prevent officials from discussing details of individual cases.

But Immigration Equality and individual immigration lawyers handling a range of Russian asylum cases told RIA Novosti that they have seen a notable rise in LGBT applicants from Russia over the past year amid new Russian laws on homosexuality criticized by rights activists and Western governments.

Immigration Equality has received 99 inquiries from Russian LGBT asylum seekers so far this year, up from 63 inquiries it fielded in 2012 and 35 in 2011, Ameesha Sampat, a spokeswoman for the group, told RIA Novosti on Thursday.

Morris, a senior attorney with the group, said it has handled 42 such cases initiated this year, 11 of which resulted in the applicants being granted asylum.

He added that a majority of these clients spoke to the group about incidents of disturbing violence against gays in Russia and controversial legislation on homosexuality enacted by Russian President Vladimir Putin earlier this year that introduced steep fines for the “promotion of nontraditional relationships to minors.”

The Kremlin maintains that the law does not prevent adults from making their own sexual choices, but it has been sharply criticized by world leaders – including US President Barack Obama – and opponents who say it amounts to a state-supported crackdown on gay people.

“A majority of the recent cases from Russia are pretty much connected to the gay climate in Russia,” Tsirina Goroshit, a Russian-speaking immigration attorney in New York City, told RIA Novosti.

Goroshit said she handled “a few” asylum applications from gay Russians last year. This year she is handling “much more than a few applications,” she said, though she declined to give the exact number.

Goroshit added that she has received about two inquiries a week this year from gay Russians considering applying for asylum in the United States citing persecution in Russia, considerably more than the number of inquiries she received last year.

New York-based attorneys Alena Shautsova and Irene Vaisman also said they have seen an increase in inquiries from LGBT Russians interested in applying for asylum, though both said that increasing legal recognition of gay rights in the United States may also be partly responsible for the apparent trend.

Several states have legalized same-sex marriage, and the US Supreme Court in June struck down the Defense of Marriage Act (DOMA), declaring unconstitutional a federal statute denying benefits to same-sex couples.

“I think it’s mainly been because of DOMA,” said Vaisman, who is currently handling asylum applications for two lesbians from Russia who married each other in the United States.

Vaisman added that the overall increase of US asylum applications from Russia may also be due in part to political conditions in Russia, whose government has been accused by opponents and Western officials of stifling dissent. Russia has repeatedly dismissed the accusations, saying it adheres to international norms of human rights and democratic government.

Shautsova told RIA Novosti that she has seen a drop in inquiries from Russians claiming political persecution at home and an increase from those citing discrimination due to their sexual orientation.

“We have great success with them because the climate is so much different in the United States than it is in Russia,” Shautsova said. “It’s relatively easy to prove their claims compared to other kinds of claims.”

Shautsova said she fields five to six inquiries from Russians every week, about three or four of which are from LGBT individuals. She has handled five cases for LGBT applicants from Russia this year, she said.

Almut Rochowanski, co-founder of the New York-based Chechnya Advocacy Network, which among other activities assists refugees from Russia’s restive North Caucasus region, said she has “a hunch” that the rise in total US asylum requests from Russia is due to LGBT applicants.

She said, however, that such increases are often due to “opportunistic developments,” such as a “new avenue” to asylum launched by immigration lawyers, as well as by individuals or groups arranging illegal immigration for Russian applicants.

An eased visa regime between Russia and the United States established last year could also be a factor, as prospective asylum recipients must make it to the United States or a port of entry in order to apply, Rochowanski said.