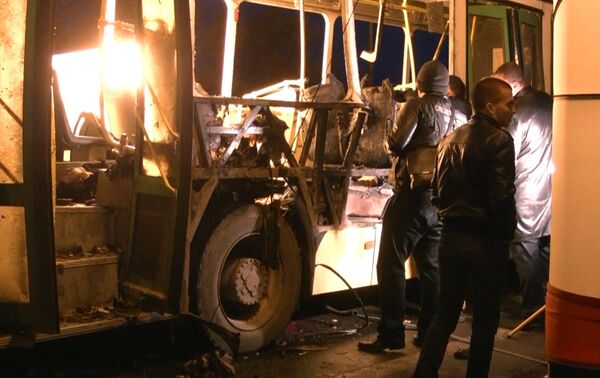 Russian investigators disclosed details Tuesday about the movements of an alleged bomber who killed six on a bus in Volgograd on Monday, saying that she originally had a bus ticket to Moscow.

MOSCOW, October 22 (RIA Novosti) – Russian investigators disclosed details Tuesday about the movements of an alleged bomber who killed six on a bus in Volgograd on Monday, saying that she originally had a bus ticket to Moscow.

Investigative Committee spokesman Vladimir Markin said Tuesday that the suspected suicide bomber, identified earlier as 30-year-old Naida Asiyalova, carried out the attack in the southern city of Volgograd after she got off a bus traveling to Moscow from Makhachkala in Russia’s southern republic of Dagestan.

“Having bought a ticket to Moscow, Asiyalova was traveling on an inter-city bus that passed through Volgograd… Her left hand was in plaster, and she was supporting it with her right hand,” Markin said, adding that she got off the bus on the outskirts of the city.

“For unknown reasons, she got off the bus in the vicinity of Volgograd’s Interior Ministry Academy about an hour before the blast,” Markin said.

According to officials, the suspected bomber blew herself up on a regular city bus in Volgograd, formerly known as Stalingrad, killing six people and injuring about 30 others.

Investigators estimated Tuesday that the bomb contained between 500 and 600 grams of TNT, while local police officials earlier said it contained about 2 kg.

The bomb was also filled with metal dowels that inflicted numerous injuries on the passengers.

Russian media reported that Asiyalova had been in a relationship with a man wanted by the authorities for his links to militant Islamic groups.

Dagestan has been an epicenter of Russia’s Islamist insurgency in the North Caucasus, where attacks on security forces, police and civilians occur regularly, generated by ethnic, religious and political rivalries, as well as poverty and corruption.

The insurgency fueled a series of post-Soviet separatist wars in the neighboring republic of Chechnya.

No group has yet claimed responsibility for Monday’s attack.