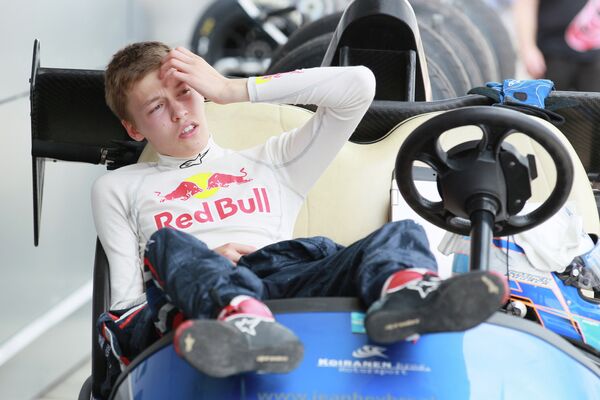 Russia’s Daniil Kvyat is to drive in Formula One next year for Toro Rosso in a surprise move for Red Bull’s second team.

MOSCOW, October 22 (R-Sport) – Russia’s Daniil Kvyat is to drive in Formula One next year for Toro Rosso in a surprise move for Red Bull’s second team.

Kvyat, 19, has enjoyed success this season in the junior GP3 series and, along with Sauber’s Sergei Sirotkin, will be one of at least two Russians on the F1 grid for next year’s first Russian Grand Prix.

“Ever since I began karting, I wanted to get to Formula 1 and now that wish will become reality next season,” Kvyat said on the Toro Rosso website late Monday.

“I had a brief taste of working with the Toro Rosso team when I drove for them at the Silverstone test and I enjoyed the experience very much.”

Kvyat has been supported by Red Bull in junior series as part of the Austrian team’s young driver program. He is second in the GP3 standings with two of 16 races remaining and could win the title at the final round in Abu Dhabi next month.

The man he replaces at Toro Rosso, Daniel Ricciardo, has been moved up to the main Red Bull team for 2014, replacing Mark Webber as teammate to triple world champion Sebastian Vettel.

“A good kid with a lot of speed. Look forward to seeing you on track bud,” Ricciardo said of Kvyat on Twitter.

There could yet be a third Russian on the grid for 2014, with former Renault and Caterham driver Vitaly Petrov bidding to return to the sport. He has said that he has been holding talks with numerous teams but has yet to land the necessary sponsorship funding.

“You deserved it! I wish you luck and excellent results!” Petrov told Kvyat on Twitter.