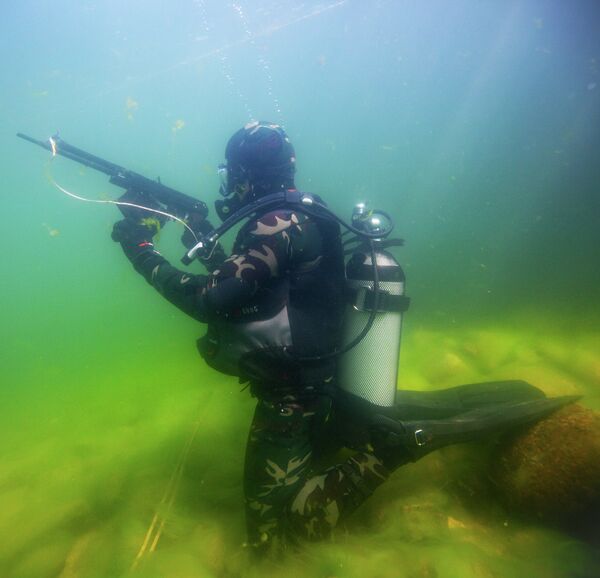 © RIA Novosti . Anton Denisov
/
Go to the photo bank
Subscribe
Russia’s army is set to adopt a new assault rifle that performs effectively both on the ground and underwater.

MOSCOW, October 22 (RIA Novosti) – Russia’s army is set to adopt a new assault rifle that performs effectively both on the ground and underwater.

The ADS assault rifle, currently being showcased by the Tula-based KBP design bureau at the Interpolitex 2013 arms show in Moscow, can fire standard-issue 5.45-mm cartridges when above the water with accuracy and effectiveness similar to that of AK-74s.

When submerged and loaded with special 5.45-mm PSP ammunition, the ADS outperforms the service-issue, Soviet-designed APS underwater assault rifle in terms of accuracy and ease of handling.

The new rifle is fitted with an integral 40-mm grenade launcher and adjustable iron sights. Its carrying handle is provided with a bracket to mount various types of optical sights.

“These rifles will soon enter service with special combat units of the Russian army,” a spokesman for KBP design bureau said Tuesday.

For several decades, Soviet and later Russian combat divers and naval commando units were armed with special weapons for underwater combat. These included the SPP-1 pistol and APS underwater assault rifle, which performed poorly on the surface.

The ADS proved its effectiveness and reliability during extensive field trials by Russian naval commando units, according to a KBP design bureau official.