Iran Gives Drone Based on ‘Downed’ US Spy Plane to Russia 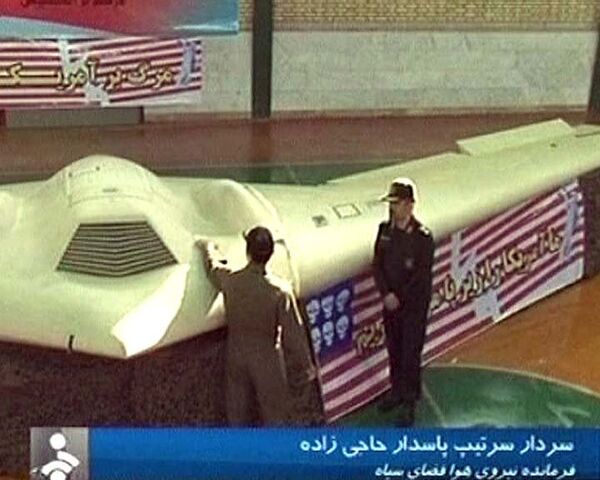 Iran's Revolutionary Guards have presented Russia with an unmanned spy plane that Tehran says was reverse-engineered from a US machine it claims to have captured last year, local media reported.

MOSCOW, October 22 (RIA Novosti) – Iran's Revolutionary Guards have presented Russia with an unmanned spy plane that Tehran says was reverse-engineered from a US machine it claims to have captured last year, local media reported.

"The drone built by the IRGC is a symbol of the technical capabilities of Islamic Iran and today we presented a real model of it as a gift to (Russian Air Force Commander) Lieutenant General Viktor Bondarev and the Russian people," Commander of Iran’s Khatam ol-Anbia Air Defense Base, Brigadier General Farzad Esmayeeli, said on Monday after a meeting with Bondarev in Tehran, FARS news agency reported.

The US military denied losing any ScanEagles over Iran. However, Canadian media reported last August, citing official records, that the Canadian Navy lost a ScanEagle UAV in the Arabian Sea in 2012, though a Navy spokesman dismissed speculation that the lost drone had been recovered by Iran.

Iran also claimed in 2011 to have captured a larger and more sophisticated US-made RQ-170 Sentinel UAV, used by the Central Intelligence Agency.

Tehran claimed in September to have completed the reverse-engineering of the RQ-170, but did not say if it had transferred that technology to any third parties.

Iran has considerable experience of reverse-engineering US-made military equipment, much of which was supplied to Tehran in the 1970s when the former Shah's regime had close ties with Washington. Since then, Iran has been unable to buy spares for much of its American hardware and has had to resort to fixing and modifying it at home to keep it in operation.