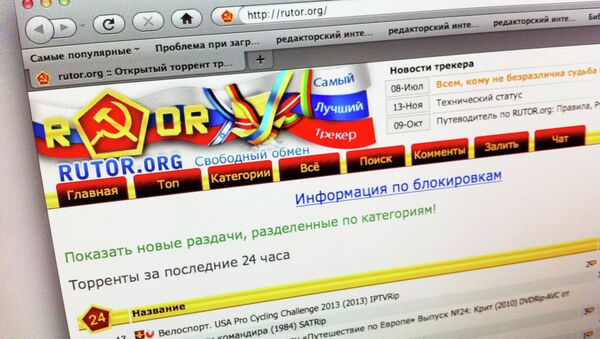 A court in Moscow has ordered the definitive closure of websites used for downloading movies in landmark rulings that follow the recent introduction of a strict anti-piracy law.

MOSCOW, October 22 (RIA Novosti) – A court in Moscow has ordered the definitive closure of several websites used for downloading movies in landmark rulings that follow the recent introduction of a strict anti-piracy law.

Moscow City Court ruled Tuesday that Rutor.org and Turbofilm.ru would be subjected to state-imposed blacklisting unless they take down copyrighted content.

While the case marks an escalation in Russian efforts to combat copyright theft, critics of the anti-piracy law have expressed concern at what they say are unfair provisions in the legislation.

A representative for the state telecommunications watchdog told RIA Novosti at the hearing that the first ruling to definitively shut down a content-sharing website was passed Monday. The official was unable to provide any details.

Under the anti-piracy law enacted in July, film copyright holders that believe their rights have been infringed can seek a court ban on the website sharing their material without first contacting the uploader. The court can then slap a temporary ban on the site as a provisional measure before definitively determining whether any copyrighted material was in fact being shared.

A petition calling for the repeal of the legislation in August gathered 100,000 signatures, enough to mandate a government review.

"This law is aimed not so much against distribution of illegal content as against the development of the Internet in Russia," the petition said.

The Communist Party launched a bid in the lower house of parliament in August to have the law repealed, arguing that legitimate sites sharing an IP address with a pirate site could be taken down as a result.

The government has rejected efforts to repeal the anti-piracy law, while lawmakers with the ruling United Russia party say the legislation will gradually be extended to cover all kinds of copyrighted content.