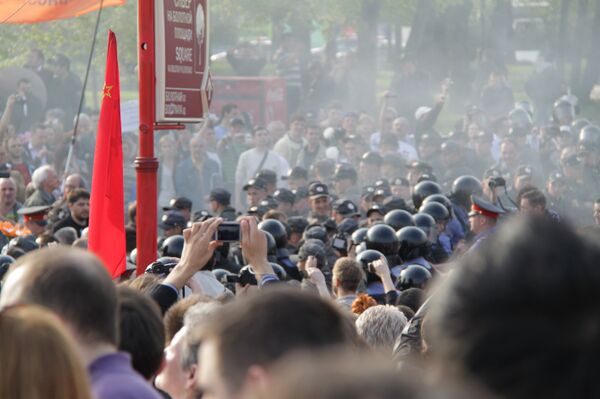 Vsevolod Chernozub, 27, is a member of Russia’s unregistered Party of December 5 who moved to Ukraine this spring.

He cited fears of legal repercussion for his participation in Moscow’s 2012 Bolotnaya Square protest as the reason for fleeing abroad.

Russia opened criminal cases against 27 people suspected of mass unrest and using violence against police after the anti-Kremlin rally on May 6 – the eve of President Vladimir Putin’s third-term inauguration – turned violent.

Two of the activists have already received prison sentences, one has been sent to a psychiatric facility, 11 are currently on trial and other cases are still being investigated.

A number of other opposition activists left Russia for various countries around Europe as government pressure on protesters in 2011-12 heightened, some of them requesting asylum in Germany and Ukraine.

Another Bolotnaya protester, Alexander Dolmatov, fled to the Netherlands and sought political asylum there. He killed himself in January this year in a Dutch deportation center after his application was rejected.

The Russian government has indicated that it may grant amnesty to the Bolotnaya Square protesters and other prisoners later this year. The State Duma is currently reviewing a prison amnesty proposal – ordered by Putin and drawn up by his human rights council – due to be enacted in December.