US Starts Transfer of its Airbase in Kyrgyzstan 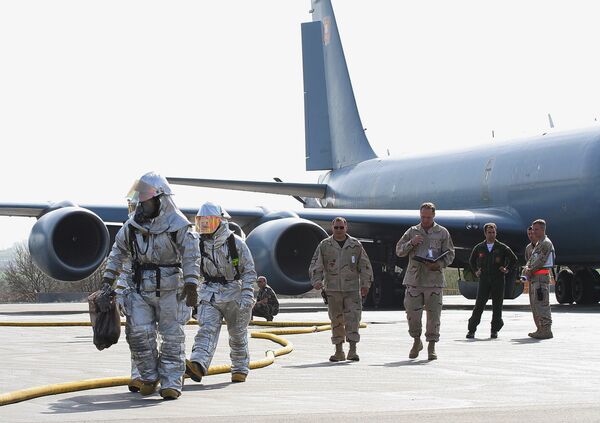 © RIA Novosti . Vladislav Ushakov
/
Go to the photo bank
Subscribe
The United States has started the withdrawal from an airbase in Kyrgyzstan that serves as the main transit hub for NATO forces in Afghanistan, the Pentagon said in a statement on Friday.

MOSCOW, October 19 (RIA Novosti) – The United States has started the withdrawal from an airbase in Kyrgyzstan that serves as the main transit hub for NATO forces in Afghanistan, the Pentagon said in a statement on Friday.

In 2011, Kyrgyz President Almazbek Atambayev announced plans to shut the base down by 2014, when the NATO-led International Security Assistance Force (ISAF) is to be pulled out of Afghanistan.

He signed a bill ordering the closure of the base into law in June. It stipulates that US forces must abandon the base at Manas International Airport, near the capital Bishkek, by July 2014.

“The Department of Defense has begun the process of relocating from the Transit Center at Manas International Airport (TCM) and plans to complete the transfer of areas and facilities to the Government of Kyrgyzstan by July 2014,” the statement reads.

“Working closely with Kyrgyzstan over the next nine months, the U.S. will manage the TCM relocation effort while continuing to support the International Security Assistance Force mission,” the Department of Defense said.

Pentagon spokesman George Little told the media that U.S. Defense Secretary Chuck Hagel and Romanian Defense Minister Mircea Dusa agreed during their meeting on Friday that US military cargo and personnel going to and from Afghanistan by air will be hauled via Romania after the closure of Manas.

Secretary Hagel and Minister Dusa finalized an agreement for Romania to support logistics into and out of Afghanistan, including both personnel and cargo movement,” Little said.

Little said Hagel also thanked Romania for its decision to host the U.S. Aegis Ashore missile defense system due to be ready in 2015.