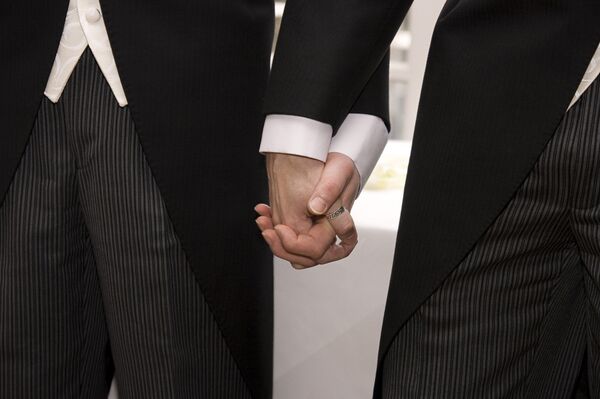 © Fotolia / govicinity
Subscribe
International
India
Africa
A bill that proposes stripping gays with children of their parental rights, introduced by Russian lawmaker Alexei Zhuravlyov, has been withdrawn from the parliament, a spokesperson for the lawmaker said Saturday.

MOSCOW, October 19 (RIA Novosti) – A bill that proposes stripping gays with children of their parental rights, introduced by Russian lawmaker Alexei Zhuravlyov, has been withdrawn from the parliament, a spokesperson for the lawmaker said Saturday.

“Yes, he has indeed withdrawn it,” spokesperson Sofia Cherepanova said, adding that the document would be later revised and again submitted to the Russian State Duma. She said that the author’s position on the matter “remains unchanged.” “Anyway, we are interested in passing the bill,” Cherepanova added.

Zhuravlyov, a member of the ruling United Russia party, submitted the bill to the lower house of the Russian parliament in September. However, the proposal has not received any significant public backing.

Between 5 and 7 percent of the Russian population are gay, a third of whom have children, Zhuravlyov’s bill claimed, citing unspecified experts. If true, between 2.3 million and 3.3 million Russians could possibly lose their children if the bill was passed.

The bill was a follow-up to legislation introduced in June that bans propagation of “gay propaganda among minors,” according to the document’s text, available on the State Duma’s website.

“Harm that could be inflicted on a child’s mental health in case of their parent’s homosexual contacts is immense,” the bill’s author said in a note accompanying the document.

The bill cited a controversial 2012 study by US sociologist Mark Regnerus as proof that gay parenting distorts a child’s sexual orientation and increases suicidal tendencies, social ineptitude and risks of catching venereal disease.

The study by Regnerus, an associate professor at the University of Austin and a practicing Christian, has sparked vehement debate in the sociological community and was formally condemned by the American Sociological Association as invalid earlier this year. Zhuravlyov’s note makes no mention of the controversy, but claims Regnerus’ findings were corroborated by unspecified independent experts.