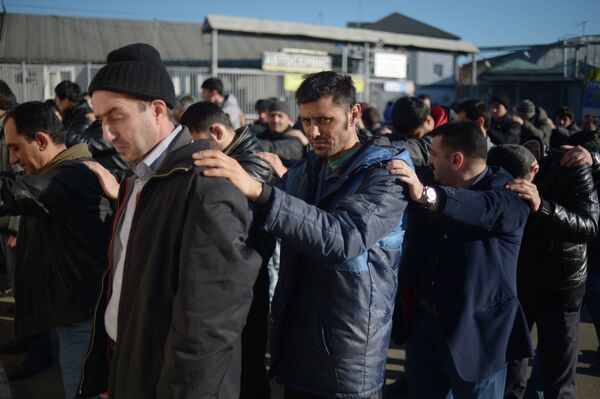 © RIA Novosti . Grigory Sysoev
/
Go to the mediabank
Subscribe
International
India
Africa
Large-scale arrests of migrants following recent clashes between the police and an angry mob of nationalists showed no sign of nearing an end in Russia at the weekend as police announced the detention of nearly 700 migrants in the Moscow Region.

MOSCOW, October 19 (RIA Novosti) – Large-scale arrests of migrants following recent clashes between the police and an angry mob of nationalists showed no sign of nearing an end in Russia at the weekend as police announced the detention of nearly 700 migrants in the Moscow Region.

Police said 675 people from Central Asia were detained as part of Operation: Anticriminal on Friday, and that they had been fingerprinted and their details taken down. Officers recorded 159 violations of migration legislation, including 105 offenses punishable by deportation, police said, adding that 11 cases into forged documents and illegal entrepreneurial activity had been opened.

City police chief Anatoly Yakunin said Friday that Moscow police will hold weekly operations to round up unauthorized migrants, unveiling a strategy apparently aimed at alleviating discontent over growing numbers of foreign workers in the city.

The latest raids appear to be an attempt to placate the nationalist sentiment that flared up in the southern Moscow suburb of Biryulyovo last weekend over the fatal stabbing of a local man. An Azerbaijani man was arrested and charged with the murder this week. On Sunday, before the suspect had been apprehended but amid rumors the murderer was a migrant, an angry mob stormed a local vegetable warehouse and shopping center where migrants were reportedly employed, and clashed with police after rallying to demand that the murderer be caught and changes made to migration law.

On Monday, police raided the vegetable warehouse and arrested over a thousand workers in what they called a preemptive crackdown on illegal migration. On the same day, the market was closed on sanitation grounds, causing an influx of sellers to another vegetable market in Khlebnikovo in the Moscow Region. On Wednesday, police subsequently turned their attention to that market, which closed the same day, and on Saturday, Oleg Molodiyevsky, head of the Moscow Region branch of the Federal Migration Service (FMS), said that a total of 94 people had been deported following a raid there.

Molodiyevsky also said Saturday that the regional FMS would enlist the help of citizens to locate “elastic apartments,” as accommodation where migrants either live in large numbers or are registered but do not reside is known.

“We agreed today that an initiative group that knows the situation concerning the local population will inform us of all the locations where migrants live in compact spaces; they are ready to work together with our [FMS] employees,” Molodiyevsky told journalists, adding that the regional FMS website allows people to inform the service of apartments they find suspicious.

Yakunin said Friday that one of the aims of the planned regular police raids was to identify all apartments in Moscow rented by unauthorized migrants by the end of the year.

While the latest raids and deportations appear to have been prompted by the violence in Biryulyovo, neither the raids nor anti-migrant sentiment are a new phenomenon. More than a thousand migrant workers were rounded up this summer during a series of police raids on locations where migrant workers are concentrated, following an incident at a Moscow market in July in which a policeman was badly injured by a mob while attempting to make an arrest there. Many of those working in the capital's large markets are either foreign or hail from the predominantly Muslim Russian republics of the North Caucasus.

Anti-migrant sentiment has increased in Russia over the last 10 years in reaction to a huge influx of migrant laborers from the North Caucasus and Central Asia, and Moscow Mayor Sergei Sobyanin promised repeatedly to take a tough stance on migration to the Russian capital during his recent successful election campaign.

However, while popular sentiment remains staunchly hostile to large-scale migration, the government is acutely aware that migrant labor is vital to the economy, as Russia's demographic profile means the number of working-age people is falling rapidly.