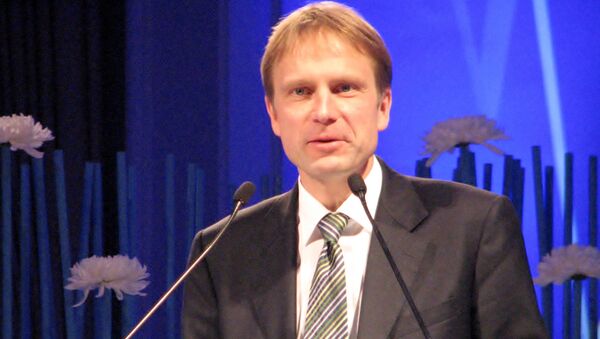 Estonia's mayoral candidate, Eerik-Niiles Kross, charged with piracy in Russia, has been placed on Interpol’s wanted list at Moscow’s request, with 24 hours to go before the local election, media reports said.

Interpol posted a notice on its website late on Friday that Kross, a candidate for the mayor of Tallinn, is being “wanted by the judicial authorities of Russia for prosecution or to serve a sentence” on charges “organization of piracy.”

Estonia's former spy chief, Kross, a candidate from the liberal conservative Pro Patria and Res Publica Union (IRL), was charged in 2012 in absentia in Russia with organizing the 2009 hijacking of the Arctic Sea cargo ship.

Estonian media reports said the announcement could strengthen the Centre Party's chances of winning a majority of seats on Tallinn's city council. The party is known to have close ties with the ruling United Russia party.

The country’s Prime Minister Andrus Ansip confirmed the report that Kross was put on Interpol's waned list and called on the Russian investigators to be more open and to cooperate with the Estonian Prosecutor General’s Office, the Estonian radio reported.

Estonian Interior Minister Ken-Marti Vaher said in an official statement Saturday his country planned to file a protest against Interpol over the move next week.

The Arctic Sea went missing in the Atlantic on July 24, 2009 while carrying a $2 million shipment of timber from Finland to Algeria. It was intercepted by the Russian Navy two weeks later off West Africa. The ship was seized by a group of Estonian, Latvian and Russian nationals. In 2010, Latvian national Dmitry Savins was sentenced to seven years in a high-security prison for leading a pirate attack on the vessel. He said the attack had been masterminded by Kross, who denied the allegations.