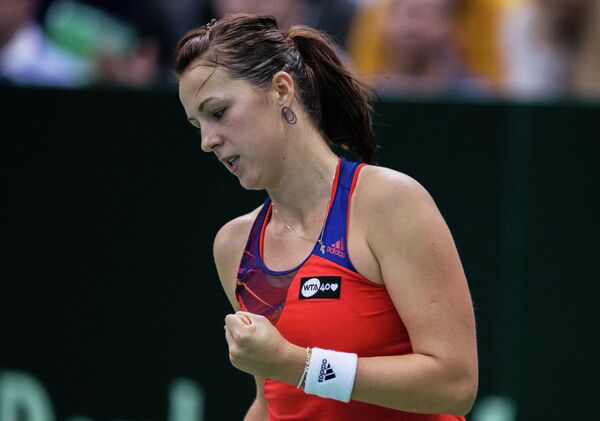 Pavlyuchenkova, cheered on by the passionate crowd in her home town of Moscow, blazed to a 6-0, 6-4 win in 70 minutes.

"I didn't expect I would win first set 6-0, because Daniela is a very experienced player who fights till the end," Pavlyuchenkova said. "To tell you the truth, I was feeling a little tired today and wasn't in top shape, so I was surprised with the result."

The Russian swept her opponent off the court in the first set, taking it in 23 minutes, before Hantuchova put up a little more resistance in the second. Pavlyuchenkova handed her opponent a way back into the match with three double faults leading to a break early in the second set, but there was ultimately no stopping the Russian, who goes on to face fifth seed Simona Halep.

Pavlyuchenkova has lost both previous encounters against the 22-year-old Romanian, who breezed past wild card Alisa Kleybanova earlier Friday.

"She always fights till the last point, plays without mistakes," Pavlyuchenkova said, commenting on her upcoming contest against Halep. "She didn't play super aggressive tennis, but it's still tough to play against her as she runs for every ball and reaches it. She is very confident and on top of her form right now."

The Kremlin Cup is a hard-court ATP 250 and WTA Premier tournament with a prize fund of $795,000 for the women's competition.