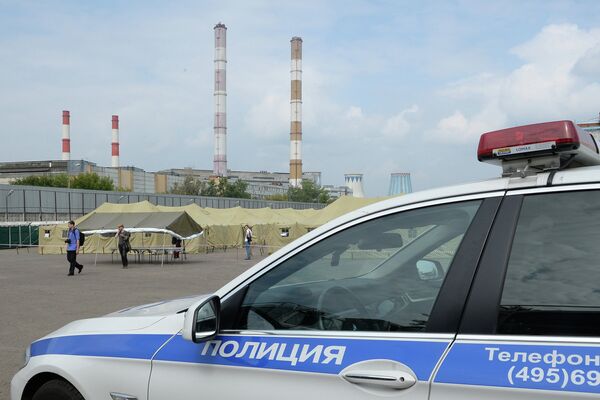 © RIA Novosti . Ramil Sitdikov
/
Go to the photo bank
Subscribe
Moscow police is to hold weekly operations to round up unauthorized migrants, the city’s head of police said Friday, unveiling a strategy apparently aimed at alleviating discontent over growing numbers of foreign workers in the city.

MOSCOW, October 18 (RIA Novosti) – Moscow police is to hold weekly operations to round up unauthorized migrants, the city’s head of police said Friday, unveiling a strategy apparently aimed at alleviating discontent over growing numbers of foreign workers in the city.

Anatoly Yakunin said police patrols will be stepped up every Friday to check on apartments where migrants may be living as part of an operation code-named “Signal.”

The operation, which will draw on the entire Moscow police force, private security firms and citizen volunteers, is also designed to cut down on illegal gambling and theft.

Yakunin said the police aim to identify all apartments in Moscow rented by unauthorized migrants by the end of the year.

The announcement comes after a week of simmering interethnic tension in the capital that followed the fatal stabbing of 25-year-old Yegor Shcherbakov in the southern Biryulyovo district. Police have arrested an Azerbaijani citizen on suspicion of committing the murder.

Authorities detained hundreds of people after an unsanctioned protest over the killing spiraled out of control amid rumors it had been committed by a migrant. On Sunday evening, protesters clashed with riot police and attacked Biryulyovo’s Pokrovsky vegetable warehouse, where many migrant laborers work.

The authorities raided the warehouse on Monday, arresting over a thousand workers in what they called a preemptive crackdown on illegal migration.

In August, Moscow police rounded up more than a thousand suspected unauthorized migrants after policemen attempting to make an arrest in another market were attacked by a mob of market workers. Many of those working in the capital's large markets are either foreign or hail from the predominantly Muslim Russian republics of the North Caucasus.

Anti-migrant sentiment has increased in Russia over the last ten years in reaction to a huge influx of migrant laborers from Russia’s North Caucasus and Central Asia.

While popular sentiment remains staunchly hostile to large-scale immigration, the government is acutely aware that migrant labor is vital to the economy, as Russia's demographic profile means the number of working-age people is falling rapidly.