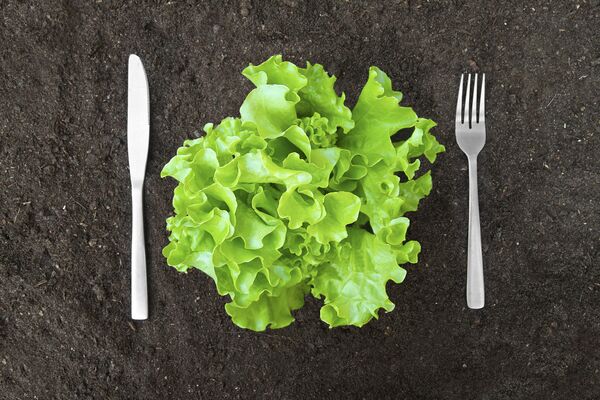 © Fotolia / ronstik
Subscribe
International
India
Africa
Moscow’s enormous transport system is a never-ending source of strange, entertaining and shocking sights, but that of two women in air stewardess uniforms handing out free salads to unsuspecting passengers is not usually one of them.

MOSCOW, October 17 (Kristen Blyth, RIA Novosti) – Moscow’s enormous transport system is a never-ending source of strange, entertaining and shocking sights, but that of two women in air stewardess uniforms handing out free salads to unsuspecting passengers is not usually one of them.

The women doing precisely this on Thursday were in fact representatives of a Moscow-based healthy-eating group carrying out a project codenamed “Stewardesses Go Underground,” an initiative to inform people about the dangers of saturated fat and encourage them to eat a healthy breakfast.

These salads were not the traditional Russian kind, full of processed meat and egg and slathered in mayonnaise, but a somewhat healthier vegetable mix dressed with olive oil. The project was organized by The Truth About Food, a non-profit organization that endorses high food product quality and a health-conscious diet.

Eating breakfast is important, Sergei Raksha – one of the group’s organizers – said, but many Russians are used to chowing down on fatty dishes like traditional pancakes stuffed with meat and cheese for the first meal of the day. Consuming foods high in saturated fat isn’t good for the body, he explained, putting people at greater risk for heart attacks and other health problems.

The group is also asking Russian airlines to switch to serving breakfasts containing less saturated fat, but according to Raksha, the main goal of “Stewardesses Go Underground” is to promote healthy breakfasting awareness.

Salad, he said, was chosen as a paradigm of a nutritious first meal not because of its strong track record as popular breakfast fare, but because it was relatively cheap to prepare.

He admitted that public transport was a “strange” environment in which to hand out food, but said that Moscow’s trains and trolleybuses were chosen in order to reach a high number of people as they travel to work and around the capital.

The group is distributing salads today on inter-city trains from Ramenskoye, in Moscow’s southeast, to the city center, as well as on the metro circle line and on the city’s Bk trolleybus route around the central area of the capital.

The Truth About Food has performed a number of other chow-related stunts around the city recently, performing a “raid” on watermelons to check nitrate levels in September and posting stickers reading, “Danger, trans fats!” on crosswalk signs near fast food restaurants, according to its website.

One of the group’s female members also donned a dress made of pork, Lady Gaga-style, and walked around Moscow in September calling for people to eat less meat.