Azerbaijan Calls on Russia to Uphold Rights of Murder Suspect 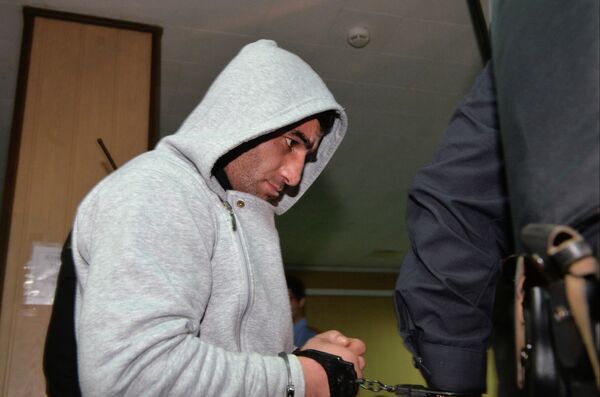 Azerbaijan has urged Russia to respect the legal and human rights of an Azerbaijani suspected of a fatal stabbing that triggered violent anti-migrant protests in a Moscow neighborhood over the weekend.

MOSCOW, October 17 (RIA Novosti) – Azerbaijan has urged Russia to respect the legal and human rights of an Azerbaijani suspected of a fatal stabbing that triggered violent anti-migrant protests in a Moscow neighborhood over the weekend.

Orkhan Zeinalov, the suspected killer of a 25-year-old Russian man in Moscow’s southern neighborhood of Biryulyovo, was apprehended Tuesday by police special forces in a town 120 kilometers outside Moscow.

A spokesman for Azerbaijan’s Foreign Ministry said Thursday it was wrong to politicize the incident.

Ministry spokesman Elman Abdullayev said it was an “ordinary non-ethnic crime,” adding that Azerbaijan’s embassy in Moscow was providing Zeinalov with consular assistance and had sent a letter to the Russian Foreign Ministry on Wednesday, stressing that it was unacceptable to mistreat him and call him a killer or a criminal before the trial.

The letter also asks for Zeinalov to be provided with lawyers and, if necessary, a translator, Azerbaijani Ambassador Polad Byul-Byul Ogly said in remarks broadcast on the Dozhd online TV channel Wednesday.

“Everything must proceed within the bounds of the law,” he said, adding that only a court can find someone guilty.

He also said he thought the incident had been blown up into a state of hysteria, though he said that if Zeinalov’s guilt was proven, the crime deserved “the highest condemnation.”

Russian Foreign Ministry spokesman Alexander Lukashevich denied there has been “anti-Azerbaijan hysteria” in Russia, stressing that Moscow is guided only by the rule of law and the necessity of punishment.

Zeinalov, 30, pleaded not guilty Thursday in a Moscow city court, which ordered him to remain behind bars until December 10.
Investigators had asked Moscow’s Presnensky District Court to rule for Zeinalov to stay in custody, arguing that he is suspected of committing a grave felony, has no permanent employment and was missing from his official place of residence at the time of his apprehension, the RAPSI legal news agency reported from the courtroom.
Zeinalov’s defense had asked the court to postpone its decision on the investigators’ request by 76 hours, but the judge refused to do so.

On Sunday evening, an angry mob protesting over the murder and demanding changes to migration policy clashed with riot police and attacked the Biryulyovo wholesale food market, where many migrant laborers work.

Researchers writing for Russian news website Slon.ru said in an article this week that the number of Azerbaijanis living in Biryulyovo has earned the district the nickname “Little Baku” – a reference to the former Soviet nation’s capital.