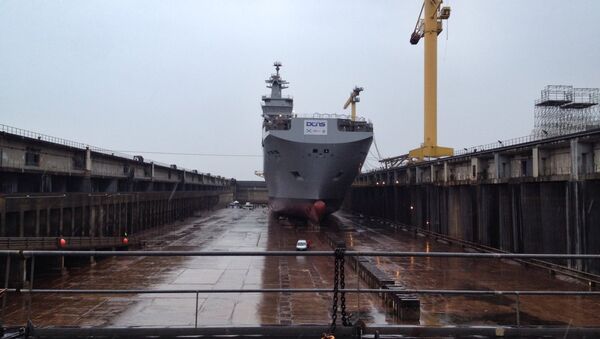 A French shipyard floated out Tuesday the first of two Mistral-class amphibious assault ships being built for the Russian Navy.

The ship, named Vladivostok, being built at the DCNS shipyard in Saint-Nazaire, is expected to start sea trials in March next year.

“The ship will be handed over unarmed, but equipped with French-made landing equipment,” DCNS program manager Yves Destefanis said at the launch ceremony. It will be fitted with Russian-made weapons systems later, he added.

The vessel will receive its additional Russian systems at the Severnaya Verf shipyard in St. Petersburg, and then be handed over to Russia’s Pacific Fleet in November 2014.

A second Mistral-class warship, the Sevastopol, is due to be floated out in October 2014.

According to the Russian Defense Ministry, both warships will be based in the Far East ports of Vladivostok and Petropavlovsk-Kamchatsky when they enter service.

A decision on whether to acquire a build a third and fourth Mistral for the Russian Navy will be taken based on the experience of testing the first one, a Russian defense procurement official said Tuesday.

“The final decision on construction of the third and fourth [Mistrals] has not been taken,” said Andrei Vernigora, director of the defense ministry’s procurement department. ‘We must see how all the systems have adapted. It’s possible the project might require further revision.”

The decision to buy a major foreign-made warship – an unprecedented move for Russia since World War II - was a controversial one. Earlier this year, Deputy Prime Minister Dmitry Rogozin, who oversees defense procurement, criticized the Mistral purchase, made under the auspices of his predecessor Anatoly Serdyukov, for requiring special lubricants and other liquids not produced in Russia in order to work properly in cold weather.