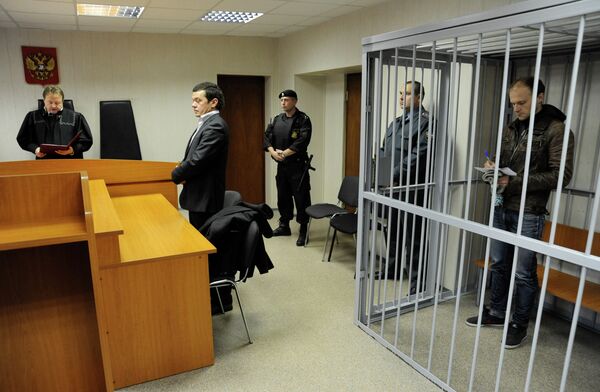 External parties should refrain from interfering in Russia’s case against Greenpeace activists whom it has charged with piracy over a September protest on an Arctic oil rig, Russia’s foreign minister said Tuesday.

MOSCOW, October 15 (RIA Novosti) – External parties should refrain from interfering in Russia’s case against Greenpeace activists whom it has charged with piracy over a September protest on an Arctic oil rig, Russia’s foreign minister said Tuesday.

Sergei Lavrov said during a press conference that the issue should be left in the hands of the courts, noting that the piracy case is currently being prepared for a Russian court and that the Netherlands has initiated arbitration proceedings to settle the dispute under international law.

Lavrov said that the environmental activists clearly violated the UN Convention on the Law of the Sea in their attempt to scale an oil platform operated by an affiliate of Russian state-run energy giant Gazprom on September 18.

Russian border guards seized the Greenpeace icebreaker Arctic Sunrise and detained everyone on board – 28 activists, one photojournalist and one videographer – in response to the activists’ protest against what they say is the potentially devastating impact of offshore drilling on the Arctic environment.

The Arctic Sunrise was towed to Murmansk and the “Arctic 30,” as Greenpeace has dubbed the group, were charged with piracy – punishable by up to 15 years in prison – and put in pretrial detention.

All 30 have appealed their detention, seeking release on bail or home arrest. The Murmansk Regional Court has rejected all 11 appeals it has heard so far, ordering the activists to remain behind bars until a hearing on November 24.

Lavrov did not specify to whom his comments were directed, though with 18 nationalities represented among the 30 detainees, the case has drawn global attention. Brazil’s President Dilma Rousseff last week promised all assistance necessary to free Brazilian activist Ana Paula Maciel, and former US Secretary of State Hillary Clinton called for an “international outcry” over the ongoing proceedings.