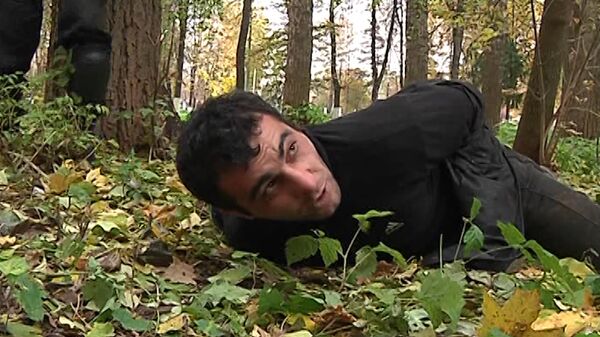 © Interior ministry press service
Subscribe
Russian police on Tuesday detained a man suspected of the fatal stabbing that ignited violent anti-migrant protests in a Moscow suburb over the weekend and led to a police round-up of migrant laborers early this week.

MOSCOW, October 15 (RIA Novosti) – Russian police on Tuesday detained a man suspected of the fatal stabbing that ignited violent anti-migrant protests in a Moscow suburb over the weekend and led to a police round-up of migrant laborers early this week.

The suspect, identified as Orkhan Zeinalov, was apprehended by police special forces in the city of Kolomna, some 120 kilometers southwest of Moscow, and was flown to Moscow in a helicopter, a police spokesman told RIA Novosti.

Russia’s Investigative Committee earlier identified Zeinalov as a 30-year-old citizen of Azerbaijan who had been making a living in Moscow as a gypsy cab driver since 2003.

Zeinalov resisted arrest when apprehended “but no policemen were hurt,” the police spokesman said, adding that the detained suspect had later admitted his guilt to officers, though it was not a formal confession.

The reward of one million rubles ($31,000) earlier announced by the Interior Ministry for information leading to the detention of the suspect will be paid out to a man who was leasing an apartment in Moscow to Zeinalov and who contacted the police, the spokesman added.

Police appeared to have been caught unawares by the scale of the anger that erupted over the weekend, which took on a virulently xenophobic tinge Sunday as rumors spread about the foreign origins of the suspected culprit in the fatal stabbing of 25-year-old Yegor Shcherbakov.

Officials in Moscow said Tuesday that at least two people are facing charges of hooliganism over their involvement in the anti-migrant riots, which targeted a vegetable warehouse in the city’s south.

City police chief Anatoly Yakunin said authorities are considering whether to keep the suspects in custody. Police have given no information about what specific role the suspects may have had in the unrest, which injured dozens, including six police officers.

Hundreds of people were detained by police overnight Sunday and on Monday in response to the violence that erupted in the Biryulyovo neighborhood, where the stabbing took place, after protests over the murder spiraled out of control.

Around 70 people have to date been charged with minor administrative offenses.

On Monday, more than a thousand people were detained, most of them reportedly labor migrants based in or around Biryulyovo. The reasons for the round-up were not immediately clear, but it seemed to be a response to anti-migrant sentiment.

Baranov blamed the weekend's violence on an unidentified group of young men, who he said were joined by discontented neighborhood residents.
“These were separate groups,” he said, adding that it was unclear where the most aggressive participants had come from.

As authorities are scrambling to deal with an outpouring of discontent over local law enforcement authorities' handling of the weekend's events, the head of the city’s police said Tuesday that he had ordered the dismissal of two senior officers. One is responsible for the city’s southern districts and the other is the head of the Western Biryulyovo precinct.

Also, in an effort to soothe concerns over the perceived lack of control over the city’s produce markets, which employs many non-Russians, investigators Tuesday made a show of ordering the closure of the warehouse attacked by mobs over the weekend.

Updated with Zeinalov’s admission of guilt, information on reward