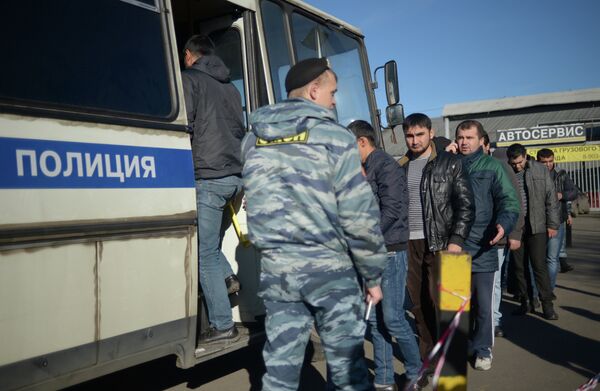 Russian police said Monday that 1,200 people had been detained in Moscow at a vegetable warehouse targeted by anti-migrant rioters during violent clashes in the area the night before.

MOSCOW, October 14 (RIA Novosti) – Russian police said Monday that 1,200 people had been detained in Moscow at a vegetable warehouse targeted by anti-migrant rioters during violent clashes in the area the night before.

The new detentions followed on the heels of some 380 overnight. Police called the latest round “preventative,” saying they would check the thousand-plus people taken into custody “for involvement in criminal activity.”

Preliminary reports suggested that Monday’s detentions targeted people who worked at the vegetable warehouse, which had come under attack Sunday, while the earlier detentions focused on those taking part in the weekend’s violence.

Photographs of Monday’s police round-up showed a long line of men, many of them non-Slavic-looking, being led onto police buses.

Protests in the Biryulyovo neighborhood, on Moscow’s southern fringes, began Saturday, apparently triggered by the fatal stabbing of a 25-year-old, Yegor Shcherbakov. Police said Shcherbakov was walking home with his girlfriend Thursday when he was killed and have described the alleged attacker – captured on grainy CCTV footage – as "not a Russian citizen." Russian media, meanwhile, have described him as a migrant.

Labor migrants in Russia number in the millions, and have become a focus of public discontent and divisive political rhetoric.

During Saturday demonstrations in Biryulyovo, protesters called on police to detain the suspect in Shcherbakov’s murder and tighten migration laws, according to local media reports.

By Sunday afternoon, the crowd turned violent, attacking police and local businesses, including the vegetable warehouse. Helicopters and over a thousand police officers were dispatched to Biryulyovo.

One video clip of the weekend violence showed a group of protestors chanting Russian nationalist slogans and breaking into a shop, smashing glass and setting off smoke bombs.

The disorder focused on a police station, but nearby stores and the vegetable warehouse were also targeted, apparently in the belief that they employed large numbers of migrant workers, Russian newspaper Vedomosti reported.

One piece of footage showed rioters breaking down the gates to the vegetable warehouse, and rampaging through the facility, smashing windows and overturning equipment.

In recent years Russia has seen a series of violent protests in reaction to crimes allegedly committed by people from ethnic minorities. Such protests, often aimed at people from the Caucasus region, are frequently motivated by what the protestors perceive as the authorities’ inability, or unwillingness, to hold perpetrators to account.

Police said late Monday morning that 308 of 380 detained overnight would be released without charge, 70 would face administrative charges and be required to appear in court, and two would be detained for 48 hours on criminal charges.

It was unclear what charges, if any, those detained at the vegetable warehouse would face.

Interior Minister Vladimir Kolokoltsev called a snap meeting shortly after the disorder broke out, the police said on their website. Kolokoltsev was shown on national television ordering police not to make any informal arrangements with criminals provoking the violence.

He also briefly put Moscow's entire police force on alert to tackle mass unrest, the Kommersant newspaper reported – invoking a strategy, called Volcano 5, for the first time since lethal terrorist attacks on the Moscow metro in 2010.

Updated with vegetable warehouse detentions, recast with added details throughout.