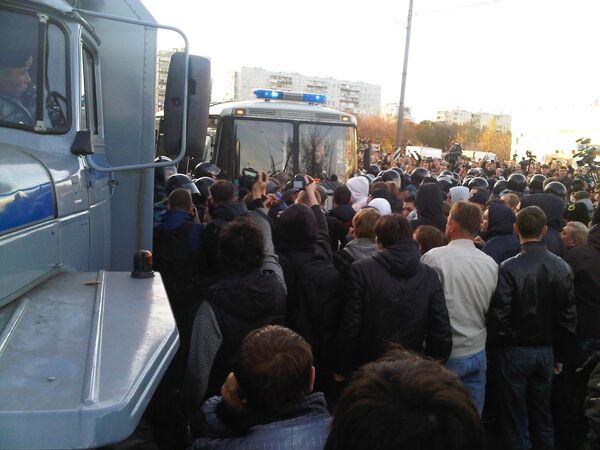 © RIA Novosti . Galina Salivon
Subscribe
The Moscow police chief has announced a reward of up to 1 million rubles (about $30,975) for identifying the suspect in a high-profile murder case in the Russian capital, city police said Sunday.

MOSCOW, October 13 (RIA Novosti) – The Moscow police chief has announced a reward of up to 1 million rubles (about $30,975) for identifying the suspect in a high-profile murder case in the Russian capital, city police said Sunday.

The announcement came on Sunday afternoon, as for a second day people gathered in southern Moscow to demand that the perpetrator be brought to justice and that migration law be tightened.

The attack took place on Thursday, in Biryulevo in southern Moscow. A 25-year-old man was fatally stabbed as he was returning home with his girlfriend, a statement on the Russian Investigative Committee website says.

Local law enforcement agencies have circulated CCTV footage of a man they believe to be a suspect. Russian media have identified the alleged attacker as a migrant.

Announcing the 1 million ruble reward on Sunday, the Moscow police chief also urged “members of the diaspora” to assist police in their investigation into the attack.

On Sunday, the Russian Investigative Committee announced that it has taken control over the investigation, apparently in an attempt to reassure the public.

On Saturday, about 40 people gathered outside the local police station to demand that the attacker be caught and the local vegetable market shut down.

While on Saturday the unsanctioned protest passed off largely without incident, on Sunday dozens of people forced their way into a local shopping center, breaking glass, setting off smoke bombs and shouting nationalist slogans, local media reported from the scene.

Police asked the crowd, numbered between 200 and over 1,000 by various estimates, to disperse, and are detaining some of those involved in the violence on hooliganism charges, journalists at the scene reported. The crowd reportedly included local residents, lawmakers and also nationalist activists and football fans.

Moscow police on Saturday said that, as part of their inquiries into the incident, they have identified and detained 87 “foreign citizens, illegally resident in the Russian Federation.”

In recent years, Russia has seen a series of high-profile crimes with a racial or ethnic component over which locals come together to express their outrage in unsanctioned protests.

These are often directed both at what they perceive as the authorities’ inability or unwillingness to hold the perpetrators to account, and at the target ethnic community.

These unsanctioned protests are dubbed “narodny skhody” or “popular gatherings,” a reference to the term “skhod” or “skhod grazhdan” (citizens’ gatherings) that can be traced back through Russian, Soviet and pre-Revolutionary law as part of local government.

Story amended on Oct. 15 modifying reference to murder time: Russian police and Investigative Committee identify it as the night of Thursday-Friday, and Wednesday-Thursday, respectively.