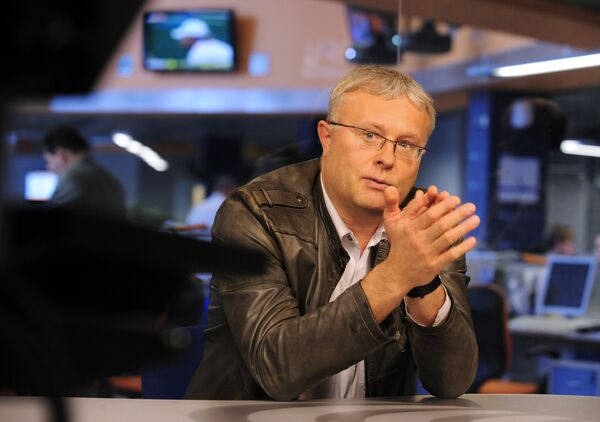 © RIA Novosti . Sergey Pyatakov
/
Go to the mediabank
Subscribe
International
India
Africa
A Russian businessman known for ties to the last Soviet president, as well as brawling skills on camera, said he is trading entrepreneurship for journalism.

MOSCOW, October 13 (RIA Novosti) – A Russian businessman known for ties to the last Soviet president, as well as brawling skills on camera, said he is trading entrepreneurship for journalism.

“From Monday I am head of Novaya [Gazeta] investigations bureau,” Alexander Lebedev said in an English-language tweet on Saturday.

“Pls stop calling me oligarch or banker, I am long paying a price for journalistic revelations in corruption and fraud,” he added, also in English.

Lebedev, 53, was also cited by Russian media as saying he will use the considerable stock of compromising information he accumulated during his business career for exposés.

Lebedev owns 39 percent of Novaya Gazeta, a liberal-minded newspaper founded in 1993 by Soviet leader Mikhail Gorbachev, who founded the publication using money from his Nobel Peace Prize and still controls a 10-percent stake in it.

The paper, published three times a week, is best known for its investigative reporter Anna Politkovskaya, an expert on rights abuses in the North Caucasus who was shot and killed in 2006, her murder still unsolved.

Potential publication topics discussed by Lebedev on Twitter included a failed attempt on his life involving a grenade launcher in 1997 and problems at the Russian banking system, which, he claimed, allows bankrupted banks to continue inviting private deposits.

Lebedev, a former KGB officer who made the 2013 Forbes Russia list with $600 million, has combined business ventures with opposition activism.

He sat on the Russian parliament, run for the mayor of Sochi, which hosts the 2014 Olympics, and even tried to set up a political party together with Gorbachev. He has also backed Alexei Navalny, a prominent whistleblower and Kremlin-basher.

Lebedev has been complaining in recent years of state pressure on his enterprises, which included banks and airlines, calling it retribution for his activism.

Perhaps the stress got the better of him on 2011, when he knocked down fellow tycoon Sergei Polonsky with a suckerpunch on national television.

Lebedev faced up to five years in jail over the brawl, but eventually got away with 150 hours of community service after celebrities including Keira Knightley, Elton John, Sting and Hugh Grant spoke in his defense.