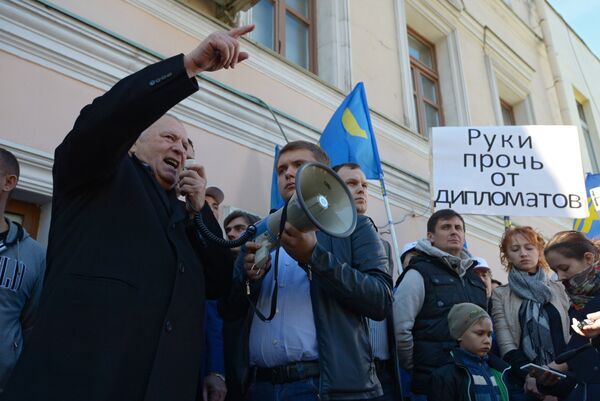 © RIA Novosti . Evgenii Biyatov
/
Go to the photo bank
Subscribe
Russian politician Vladimir Zhirinovsky, known for his headline-grabbing outbursts, said Saturday the Dutch interior and foreign ministers should resign over last week’s detention of a Russian diplomat by police in The Hague.

MOSCOW, October 12 (RIA Novosti) – Russian politician Vladimir Zhirinovsky, known for his headline-grabbing outbursts, said Saturday the Dutch interior and foreign ministers should resign over last week’s detention of a Russian diplomat by police in The Hague.

Supporters of Zhirinovsky, who leads Russia's nationalist Liberal Democrat Party, gathered for a picket outside the Dutch Embassy in Moscow on Saturday to protest against the arrest of Dmitry Borodin, deputy to the ambassador at the embassy in the Netherlands. Russian media reports said police had forced their way into Borodin’s apartment, assaulted him, and then held him at a police station for several hours without explanation.

“We have the right to demand tougher measures against the lying Dutch officials. The interior minister should resign as his police officers conducted these acts, and so should do the foreign minister,” Zhirinovsky told his supporters at the picket.

Russia reacted angrily to the detention, saying it violated international rules granting immunity to diplomats, and demanded immediate apologies. The Netherlands later apologized to Russia for the incident.

In an account of the incident on microblogging site Twitter, Borodin accused police of tugging his one-year-old daughter's hair as he was taken to the police station along with his two children. He said that he had identified himself to policemen as a diplomat.

The incident has further strained already troubled relations between the two countries.