Over 60 Detained at LGBT Rally in Russia's St.Petersburg 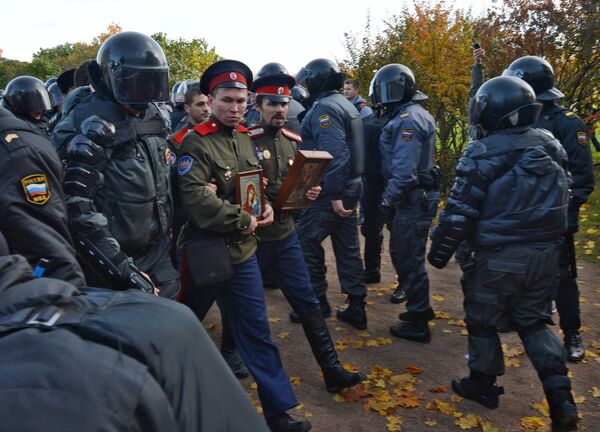 The rally on the Field of Mars (Marsovo Pole) in the city’s downtown was scheduled at 2 p.m., but anti-gay activists arrived at the scene before that time to protest against the event. The activists included Cossacks, Orthodox protesters and members of Russian nationalist organizations.

When the LGBT activists arrived, they were met by the anti-gay activists who sang religious songs and did not allow them to get to the venue of the rally. The protesters said they were against holding the event on the Field of Mars, which had a war memorial.

The event was held to mark the National Coming Out Day, a day to celebrate and support people who have disclosed their sexual identity. The Field of Mars is the city’s “Hyde Park” where demonstrations are allowed without special sanctions.

Police intervened in the scuffle shortly after the gay rights activists attempted to raise rainbow flags. A total of 15 LGBT activists and 30 anti-gay campaigners were held at the event, the Ekho Moskvy radio station reported earlier on Saturday.

In late June, several LGBT activists were beaten up by their opponents during a previous such event in St. Petersburg, and more than 50 held by the police.

Russia adopted a controversial and vaguely-worded law in June banning the promotion of "non-traditional sexual relationships" to minors, an offense punishable with hefty fines. While the law’s proponents argue it is aimed at protecting children, critics claim the legislation is part of a much wider crackdown on Russia’s lesbian, gay, bisexual and transgender (LGBT) community.

Updates with number of detained in lead, headline.