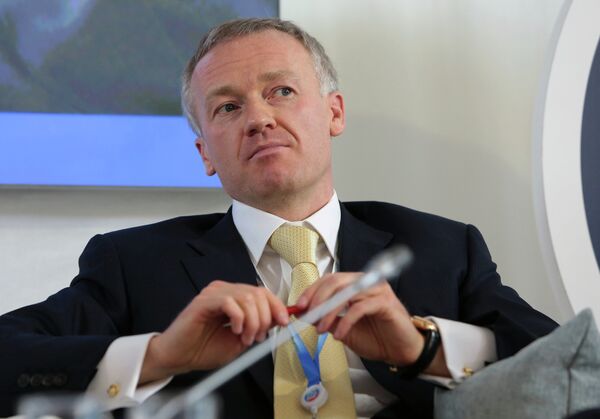 © RIA Novosti . Yekaterina Chesnokova
/
Go to the photo bank
Subscribe
Belarus has changed the charges faced by the detained CEO of Russian fertilizer maker Uralkali, upping the maximum possible punishment by two years, according to the Belarusian president.

MINSK, October 11 (RIA Novosti) – Belarus has changed the charges faced by the detained CEO of Russian fertilizer maker Uralkali, upping the maximum possible punishment by two years, according to the Belarusian president.

“They have reclassified the charge to embezzlement, I think,” Alexander Lukashenko said at a press conference in Minsk on Friday.
Vladislav Baumgertner was previously charged with abuse of power, which is punishable by up to a decade in jail, according to the Belarusian Criminal Code. The maximum penalty for embezzlement in Belarus is 12 years.

Baumgertner, a Russian citizen, was detained in the Belarusian capital in August and taken into custody, though he was later transferred to house arrest, also in Minsk.

Belarus also asked Interpol to issue an international arrest warrant – on suspicion on abuse of power – for Russian billionaire Suleiman Kerimov, a major shareholder in Uralkali, though Interpol refused to do so.

The charges followed a July decision by Uralkali, a leading producer of potash fertilizer, to dissolve its international cartel with the Belarusian state-run giant Belaruskali, sending potash prices spiraling down.

Lukashenko said Friday that Russia and Belarus should restore the cartel and that he had requested his Russian counterpart Vladimir Putin’s help on the issue. The Kremlin did not comment on Lukashenko’s statement.

Belarus’ authoritarian leader also said that Kerimov – who is reportedly seeking to sell his 21.75 percent stake in Uralkali – had personally asked for his pardon.

“I got a sign from Kerimov saying: ‘I’m sorry, it’s my fault.’ I can forgive, but you’ve done a lot of harm, what’s to be done about it?” Lukashenko said.