Russia’s Pirate Party Not Allowed in Election – For 3rd Time 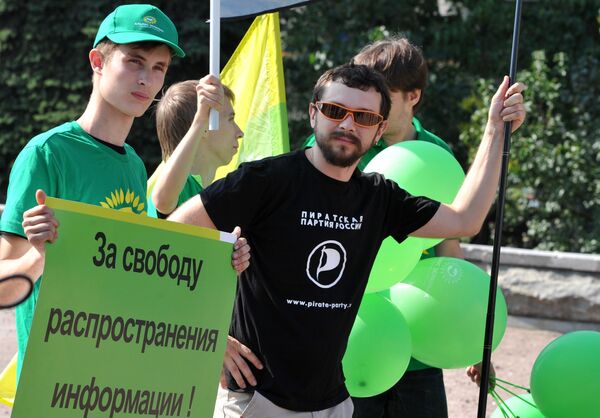 © RIA Novosti . Sergei Kuznetsov
/
Go to the photo bank
Subscribe
A group of Russian crusaders for Internet freedom this week were for a third time denied a chance at running for office on the accusation that their political party promotes robbery on the high seas.

MOSCOW, October 11 (Alexey Eremenko, RIA Novosti) – A group of Russian crusaders for Internet freedom this week were for a third time denied a chance at running for office on the accusation that their political party promotes robbery on the high seas.

The Pirate Party of Russia was refused registration by the Justice Ministry because “pirate” is in their name, according to an official rejection letter that the party posted online Friday. “Piracy is a criminal offense,” the letter said.

Parties need to register with the Justice Ministry in order to be allowed on ballots. The Pirate Party had already applied for registration twice since its 2009 inception, but was turned down on paperwork technicalities as well as allegedly promoting a felony.

Russia’s Pirate Party is a part of the 69-member Pirate Party International, which advocates freedom of information around the world.

The Russian party will reapply for registration without changing its name, spokeswoman Natalia Malysheva told RIA Novosti on Friday. The party will also appeal the ministry’s decision in court, she added.

The party already lost a lawsuit over a previous refusal, but it has filed an appeal and intends to go to the European Court of Human Rights in Strasbourg if Russian courts do not rule in the party’s favor, Malysheva said.

The Pirate Party is not alone in being rejected for registration multiple times. The radical leftist Rot Front party has been denied registration seven times since 2010, including over their emblem – an upraised fist – which the Kremlin said promoted extremism.

In the mid-2000s, the Kremlin whittled down to seven the number of Russian parties allowed to run in elections by radically tightening rules for registering and operating political parties.

But after mass opposition protests began in Moscow in 2011, the government eased party legislation. The number of political parties in Russia has since shot up to 61.

But the government still refuses registration to certain parties, including the People’s Alliance by Kremlin-basher Alexei Navalny. Though the Justice Ministry cites paperwork problems when it rejects that party, critics claim that the decisions are politically motivated.