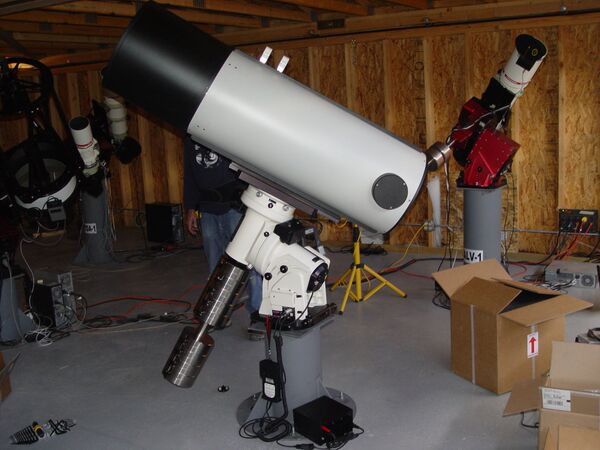 © Photo : Leonid Elenin
Subscribe
A near-Earth asteroid about a fifth the size of the space rock thought to have killed the dinosaurs has been discovered by a Russian-operated observatory in New Mexico

MOSCOW, October 11 (RIA Novosti) – A near-Earth asteroid about a fifth the size of the space rock thought to have killed the dinosaurs has been discovered by a Russian-operated observatory in New Mexico

The kilometer-wide asteroid, dubbed 2013 TB80, was first spotted on Wednesday by the remotely run ISON-NM observatory and was later confirmed by US and Japanese astronomers, the International Astronomical Union said in an online statement.

The asteroid, believed to be the 704th largest with an orbit that comes relatively near Earth, does not pose a danger of crashing into our planet, said the head of the observatory that made the discovery.

“It’s a big asteroid, but it poses no danger for us,” Leonid Elenin, who lives in the Moscow Region, told RIA Novosti on Friday.

Near-Earth celestial bodies are defined as those that come as close to the Sun as the Earth does, which means they have a chance of colliding with our planet.

NASA estimates that mankind is currently aware of 93 percent of near-Earth asteroids that are above one kilometer in diameter. None of them is expected to collide with the Earth in the foreseeable future.

The space rock discovered Wednesday is between six and 18 times larger than the one believed to have crashed in 1908 near Russia’s Tunguska River, a meteorite whose impact is considered the most powerful in recorded history.

Size estimates for the newly discovered asteroid, though, could undergo dramatic revision after astronomers define its composition.