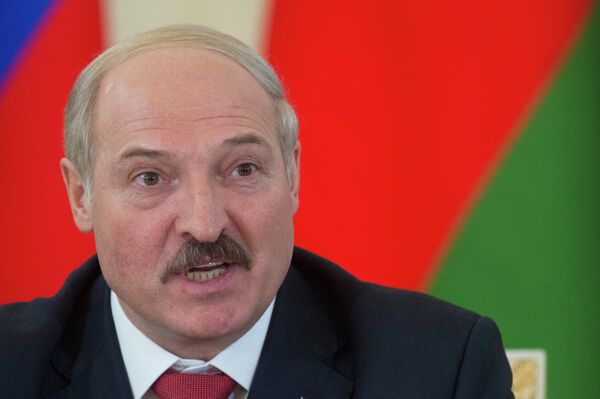 © RIA Novosti . Sergey Guneyev
/
Go to the photo bank
Subscribe
Belarusian President Alexander Lukashenko, who has molded a strongman image for himself during his nearly two decades as autocratic ruler, told Russian reporters on Friday that the only way to fight crime in the 1990s was a “punch in the face.”

MINSK, October 11 (RIA Novosti) – Belarusian President Alexander Lukashenko, who has molded a strongman image for himself during his nearly two decades as autocratic ruler, told Russian reporters on Friday that the only way to fight crime in the 1990s was a “punch in the face.”

“When I became president, the Soviet Union had just collapsed, and [Belarus] was a country in transition. Safety had to be ensured,” Lukashenko, in power since 1994, told a press conference for international media in Minsk.

He said that authorities would shoot violent criminals on site if they resisted arrest, and that this policy helped eradicate gangs. His first crackdown as president, he said, was on a Moscow-Berlin highway that passes through Minsk.

Criminals disguised as police officers would stop Mercedes and Audi cars on the highway and steal them, severely injuring or killing anyone who resisted, Lukashenko said. A “radical decision” needed to be made.

So Belarusian authorities conducted a sting operation, driving luxury cars down the road and waiting to be stopped by the fake cops, the president said. “All thugs who resisted were shot dead.”

“Three gangs were eliminated, and a fourth never came. It has been quiet there ever since,” he said.

“A thug only understands you when you speak his language,” Lukashenko said. But he added, Belarusian police serve within the confines of the law because “if not, that would be a bigger crime than the one you want to eradicate.”