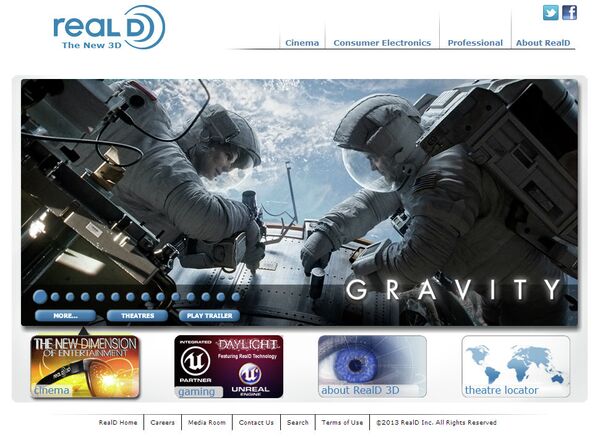 © RealD.com
Subscribe
As audience interest in 3D movies fades in the United States – sparking fears in Hollywood that the technology is increasingly being viewed as a gimmick – the nation’s leading 3D cinema technology firm is aggressively expanding its presence in Russia, according to US media reports.

WASHINGTON, October 11 (RIA Novosti) – As audience interest in 3D movies fades in the United States – sparking fears in Hollywood that the technology is increasingly being viewed as a gimmick – the nation’s leading 3D cinema technology firm is aggressively expanding its presence in Russia, according to US media reports.

Beverly Hills-based RealD announced Thursday that it had struck a deal with Russia’s Cinema Park to equip up to 200 of the chain’s screens with 3D technology, the Los Angeles Times reported.

Meanwhile, under deals agreed earlier this year, RealD is already in the process of installing more than 300 3D screens in cinemas owned by rival Russian cinema chains Karo Film and Kinomax according to The Hollywood Reporter.

RealD is also bringing its “LUXE” large screens, a rival to the popular IMAX format to Russia, with plans to open the first for Cinema Park in St. Petersburg this winter, with a further 10 slated for auditoriums owned by Karo Film, The Hollywood Reporter added.

RealD’s Russian deals come at a time of difficulty for the company, which produces the world’s most widely used 3D cinema technology. Shares in the firm have fallen 40 percent this year as moviegoers seem to be losing their taste for 3D, the LA Times reported Thursday.

This summer, 3D ticket sales accounted for a mere 25 percent of the total box office for the animated movie “Turbo” in the US, the worst result in the format’s history, TheWrap.com reported in July.

Russia however is a booming market for all kinds of movie formats. In 2012, total box office receipts reached an all-time high of $1.33 billion, an 18.8 percent jump on the previous year, TheWrap.com reported Thursday.