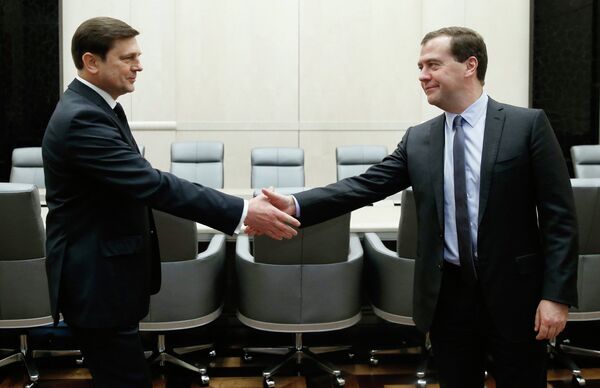 During a meeting with Ostapenko Thursday, Medvedev said he hoped that, as head of the Federal Space Agency Roscosmos, Ostapenko will help streamline the country’s space program, which has experienced numerous setbacks in recent years.

Earlier Thursday, Ostapenko, 56, was relieved of his duties as deputy defense minister and discharged from military service by President Vladimir Putin, in a move preceding his new appointment.

Ostapenko started his military career in the Soviet Strategic Missile Forces in 1979. He was promoted to commander of the Russian Space Forces in 2008, and led them until his November 2012 appointment as deputy defense minister.

Rumors of a looming shakeup at Roscosmos, following a series of embarrassing space launch failures, have been circulating in the Russian media since Monday.

The agency’s outgoing head Vladimir Popovkin was dismissed from his post Thursday by a government decree.

The document did not mention the reasons for his dismissal, but Deputy Prime Minister Dmitry Rogozin, who oversees the defense and aerospace sectors, wrote in his Twitter blog Thursday that Popovkin left his post “with dignity.”

“Popovkin went with great dignity. Ostapenko came with great expectations,” Rogozin said, adding in his follow-up Twitter message that Popovkin would be offered a top managerial position in a new state corporation that will be created to take over manufacturing facilities from Roscosmos.

Popovkin, who turned 56 in September, headed Roscosmos since April 2011.

At a Roscosmos meeting Thursday, when Ostapenko was introduced to the agency’s staff, Popovkin wished the new space chief more luck than he had during his 896-day tenure.

“I know from my personal experience how failures in the space industry affect the entire nation,” he said, expressing hope that Russia’s space program “would blossom” under Ostapenko.

Most of the setbacks in Russia’s space industry have been blamed on faulty hardware and poor management. In the most recent mishap, on July 2, a Proton-M rocket carrying three Glonass navigation satellites exploded shortly after it was launched from the Baikonur space center in Kazakhstan.

An Audit Chamber report in July slammed Roscosmos as ineffective and plagued by poor management and misuse of funds. It noted that over the period 2010 to 2012 the agency had only completed 47 percent of the satellite launches planned.

The chamber also blamed the space agency for relegating control over major projects to individual state-run or private companies.

The Russian government is set to radically overhaul the structure of its space industry in a bid to boost efficiency and cut down on the misuse of funds, under plans unveiled Wednesday by Deputy Prime Minister Rogozin at a meeting with President Vladimir Putin.