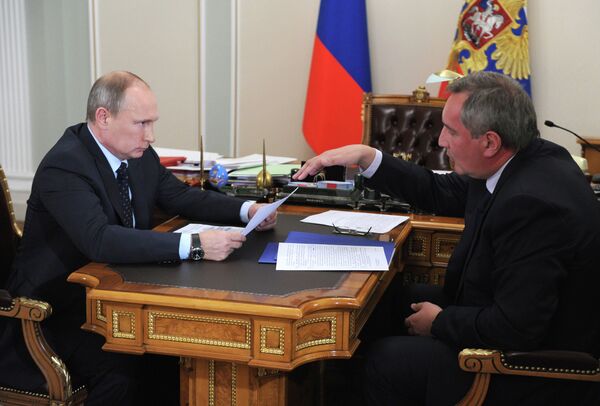 The Russian government is set to radically centralize its space industry in a bid to combat major inefficiencies and cut down on the misuse of funds under plans unveiled Wednesday by Deputy Prime Minister Dmitry Rogozin.

NOVO-OGARYOVO, October 9 (RIA Novosti) – The Russian government is set to radically centralize its space industry in a bid to combat major inefficiencies and cut down on the misuse of funds under plans unveiled Wednesday by Deputy Prime Minister Dmitry Rogozin.

Speaking to President Vladimir Putin about the plans, Rogozin said a new state corporation will be created to take over manufacturing facilities from the Federal Space Agency, whose prestige has been severely dented in recent years by a string of failed rocket launches.

The proposed United Rocket and Space Corporation will enable the trimming away of redundant departments replicated elsewhere in the space industry, Rogozin told Putin.

A variety of manufacturing facilities in the rocket and space industry are currently bundled in 10 integrated structures and there are also a large number of independent organizations operating outside those structures that operate to their own plans, said Rogozin, who oversees the country’s defense sector.

The new corporation will introduce a unified technical policy and save financial resources by consolidating developers and manufacturers, he said.

Rogozin said that the space industry needs to diminish its reliance on imported components, especially in the production of satellites, and should focus on domestic production.

The plan would improve on the current state of affairs by effectively combining the civilian and defense capabilities, Rogozin said.

The proposed corporation will comprise all rocket and space-manufacturing facilities and design bureaus, except for a number of defense-related firms, Vedomosti business daily reported Wednesday.

Federal Space Agency chief Vladimir Popovkin told Vedomosti it would take about a year to create such a corporation.

Under the plan, the Federal Space Agency, or Roscosmos, will act as a federal executive body and contracting authority for programs to be implemented by the industry, Rogozin said.

He said Roscosmos' future functions remain to be ascertained and that its management will be boosted.

Roscosmos has seen a number of failed launches in recent years, though none involved manned missions.

In July, a Proton rocket blew up shortly after launch because the angular velocity sensors were installed upside-down and apparently hammered in to make them fit, according to an official investigation.

An Audit Chamber report in July concluded that Roscosmos was ineffective and plagued by poor management and misuse of funds.

Its also said the agency had only launched 47 percent of Russia's required number of satellites between 2010 and 2012.

The proposed United Rocket and Space Corporation is roughly analogous to existing state-controlled joint stock companies such as United Aircraft Corporation, which integrates the aviation sector, and the United Shipbuilding Corporation, which unifies shipbuilding, repair and maintenance subsidiaries across Russia.