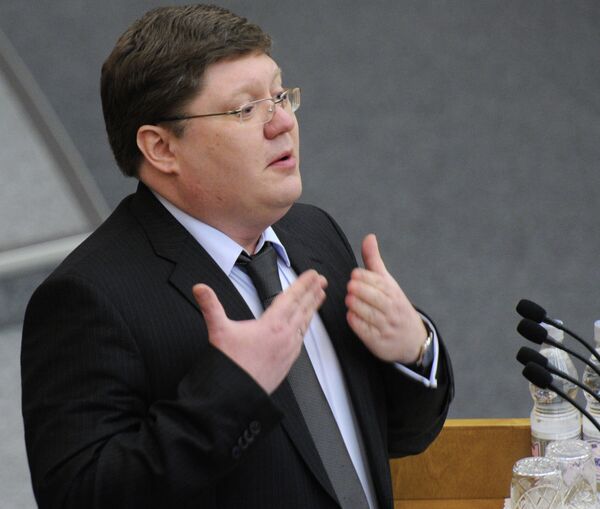 A senior official in the ruling United Russia party hit the headlines Wednesday after the nation’s top airline kicked his aide off a plane for causing an alcohol-fueled scene.

MOSCOW, October 9 (RIA Novosti) – A senior official in the ruling United Russia party hit the headlines Wednesday after the nation’s top airline kicked his aide off a plane for causing an alcohol-fueled scene.

Aeroflot says State Duma deputy Andrei Isayev showed up for the St. Petersburg-Moscow flight Tuesday evening together with his intoxicated assistant, Alexander Poglazov, who proceeded to get into an argument with the crew.

A witness and the airline said Isayev yelled at attendants and threatened to have them dismissed when they ordered Poglazov to leave the flight.

The story might have ended there had Ilya Perekopsky, deputy general director of social networking site VKontakte, who was also on board the flight, not posted a message about the incident on Twitter. As a result, the fracas, which caused an hour-and-a-half delay to the flight, ended up in the Russian media.

The incident will prove yet another blow to United Russia’s already tarnished image.

Although it still holds a majority of seats in the lower house of parliament, the party’s popularity ratings have plummeted in recent years and opposition politicians argue that it has achieved electoral success largely through widespread fraud. The phrase “party of crooks and thieves” was coined by opposition leader Alexei Navalny in 2011 and has since gained widespread currency among government critics.

Isayev confirmed that an incident involving his assistant had taken place, but denied threatening the crew.

Nonetheless, late Wednesday he suspended his membership in the presidium of the party's ruling body and submitted his resignation as its deputy secretary, according to the party. He has not left either United Russia or the Duma, but apologized to all those inconvenienced by the incident.

Earlier in the day Isayev said his aide was removed from the plane and fined 100 rubles ($3) by the police for being intoxicated in public.

“There was no hooliganism on his part,” Isayev told RIA Novosti.

Sogrin of Aeroflot said Isayev decided to leave the plane of his own accord.

Isayev said Aeroflot was trying to cover up the delay with the incident as “the plane had been delayed” by the time they arrived.

He said his aide had submitted a letter of resignation, which has yet to be approved.

"We are going to ask him to provide explanations," Neverov told RIA Novosti.

Updated with news of Isayev's resignation from top party posts.