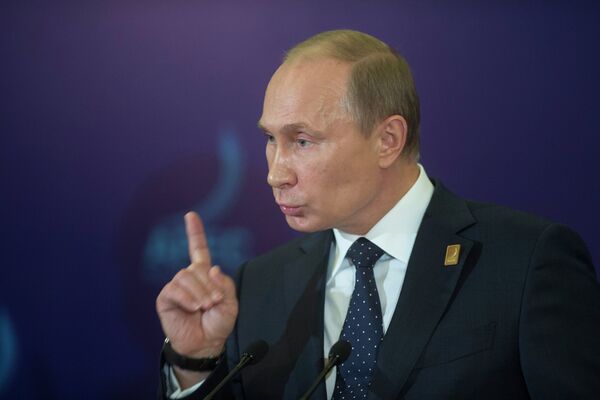 Russian President Vladimir Putin warned Ukraine on Tuesday that economic relations between their nations would suffer if Kiev goes ahead with plans to conclude a series of free trade agreements with the European Union.

MOSCOW, October 8 (RIA Novosti) – Russian President Vladimir Putin warned Ukraine on Tuesday that economic relations between their nations would suffer if Kiev goes ahead with plans to conclude a series of free trade agreements with the European Union.

Putin’s comments mark another foray in Moscow’s efforts to counteract the westward drift of former Soviet satellites out of its economic sphere of influence.

Putin said in Bali, where he was attending the Asia-Pacific Economic Cooperation forum, that Ukraine would create problems for trade turnover and cooperation by signing a trade agreement with the EU next month during a summit in Lithuania.

“We hope that our Ukrainian friends will also consult with us before they take any sort of step,” Putin was cited as saying by RIA Novosti’s Prime business news agency.

The Kremlin is eager to see Ukraine and other former Soviet nations to join a Moscow-led Customs Union.

Some see apparently punitive measures taken by Moscow against Kiev as possible retaliation for Ukraine’s closer ties to the EU.

Russia temporarily tightened customs procedures with Ukraine in August, causing chaos at the border. Russian presidential adviser Sergei Glazyev openly warned Kiev at the time that the changes would be made permanent if trade agreements with the EU were implemented, a move that he described as “suicidal.”

Putin has said that Russia will be obliged to use stiffer customs regulations to protect itself from a flood of European and Turkish goods that would be re-exported to Russia via Ukraine if trade with the EU were increased.

“We will be forced to take defensive measures, but these should be measures within the framework of the World Trade Organization,” Putin said Tuesday, Prime reported.

While Putin was clear about the economic consequences of any trade deals, he said the political relationship between Russia and Ukraine would not suffer.

“I am sure we will not have any political problems,” Putin said, Prime reported. “This does not mean separation. However we move, we will meet somewhere, it’s a question of the cost of such a journey, and its effectiveness.”