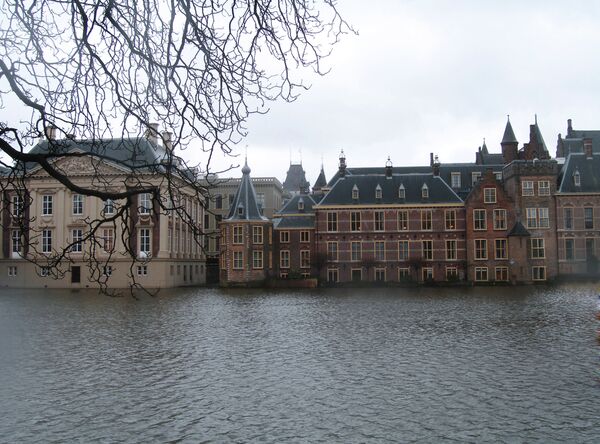 The stand-off between Russian and the Netherlands escalated Tuesday as Moscow angrily demanded a full account of how one its diplomats came to be arrested by the Dutch police over the weekend.

MOSCOW, October 8 (RIA Novosti) – The stand-off between Russian and the Netherlands escalated Tuesday as Moscow angrily demanded a full account of how one its diplomats came to be arrested by the Dutch police over the weekend.

Russian Foreign Minister Sergei Lavrov told Russia Today channel that the state of relations between the two countries will depend on how the Netherlands chooses to handle the matter.

“We need to know what disciplinary measures would be taken in regard to these police officers,” Lavrov said in an English-language interview. “When we get a reaction on this demand, then we will see how we will handle the relations further.”

The Foreign Ministry of the Netherlands on Tuesday confirmed that Dmitry Borodin, deputy to the ambassador at the Russian embassy in the Netherlands, was detained over the weekend and said it would investigate whether the incident had violated any diplomatic rules.

Lavrov said the incident was in violation of the Vienna Convention, under which diplomats are granted immunity.

“The explanation was given that somebody told the police that he and his wife were maltreating the kids, two and four-year-old kids, which is absolutely unacceptable apart from any diplomatic privileges,” Lavrov said. “The police has no right to enter an apartment of a diplomat.”

Dutch Foreign Ministry spokesperson Thijs van Son said in a statement sent to RIA Novosti that “on Saturday evening an incident occurred involving a Russian diplomat, which led to an arrest being made by the Dutch police.”

The statement said that the Netherlands would apologize to Russia if investigations revealed any action had been undertaken in violation of the Vienna Convention, under which diplomats are granted diplomatic immunity.

In a sign that the controversy is unlikely to abate soon, Russia’s Foreign Ministry quickly replied to the Dutch statement by demanding a fuller account.

“Russia continues to await exhaustive explanations, if these are even possible, and real apologies from the Netherlands,” Foreign Ministry spokesman Alexander Lukashevich said.

Putin, who was attending an Asia-Pacific Economic Cooperation forum in Bali on Tuesday, said earlier in the day that the incident with Borodin was “a crude violation of the Vienna Convention,” and demanded “clarifications, apologies and the punishment of those guilty.”

Specific details about what led to the detention of Borodin, a senior diplomat previously posted in Belgium, Luxembourg and several African countries, remain murky.

Russian state television Rossiya-24 reported that local police forced their way into Borodin’s apartment, assaulted him, and then held him at a police station for several hours without explanation.

Reuters cited a Dutch police spokeswoman in The Hague, Ellen van Zijl, as confirming the incident.

She did not give the details of the incident saying only: “This man is fine.”

“He is not in the hospital,” she was quoted as saying.

He also thanked his Twitter subscribers for the words of support, but added that he was not going to further comment on the incident as it was “not a private affair.”

Russia’s ombudsman for children’s rights Pavel Astakhov said Tuesday that if allegations concerning Borodin’s mistreatment of his children were confirmed, then Russia would thoroughly investigate the incident.

The Dutch Ambassador to Russia, Ron van Dartel, was summoned to the Russian Foreign Ministry on Tuesday morning and handed a note of protest over the incident. He left the building without commenting to the press.

The spat marks another awkward turn in relations between Russia and the Netherlands, which have been tested by the seizure by Russian authorities of a Dutch-registered icebreaker belonging to Greenpeace, and the subsequent imprisonment of all the people on board.

The Netherlands described the seizure of the ship on Saturday as illegal, and the Dutch government has said that it has initiated legal proceedings against Russia at the United Nations over the incident.