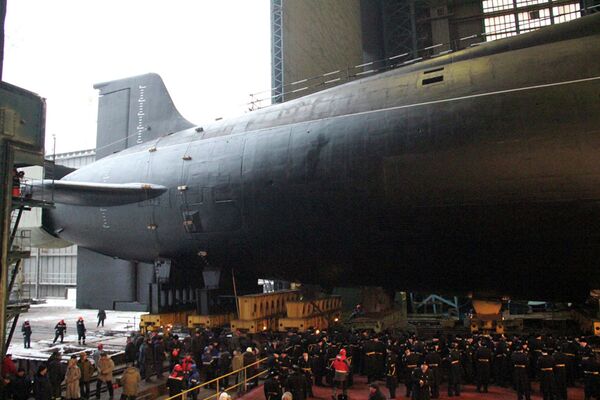 © RIA Novosti . A. Petrov
/
Go to the mediabank
Subscribe
International
India
Africa
Russia’s new-generation nuclear-powered submarine has successfully completed the first round of sea trials in the White Sea, the manufacturer said Tuesday.

The Vladimir Monomakh, a Project 955 Borey-class submarine, spent 25 days at sea, testing all of its systems and equipment, the Sevmash shipyard said in a statement. It added that the submarine would soon conduct a final series of sea trials to be completed by year-end.

Sevmash chief Mikhail Budnichenko said in July that the Vladimir Monomakh would join the navy in mid-December. But the submarine, to be armed with the Bulava submarine-launched ballistic missile (SLBM), had its trials put on hold earlier this month following an unsuccessful Bulava launch. Defense Minister Sergei Shoigu also ordered five additional launches of the troubled SLBM, a ministry spokesman said.

With the September 6 failure, eight of 19 or 20 test launches of the Bulava have been officially declared unsuccessful. However, some analysts suggest that in reality the number of failures is considerably higher. Despite several previous failures officially blamed on manufacturing faults, the Russian military has insisted that there is no alternative to the Bulava.