Russia is looking at ways to use the World Trade Organization (WTO) to arbitrate in commercial disputes with the European Union, a deputy economic development minister said Sunday.

MOSCOW, October 6 (RIA Novosti) – Russia is looking at ways to use the World Trade Organization (WTO) to arbitrate in commercial disputes with the European Union, a deputy economic development minister said Sunday.

“We are seriously looking at the course of our claims within the WTO on a whole range of issues,” Russian deputy economic development minister Alexei Likhachev told reporters in Indonesia in response to a question about solving disagreements with the EU.

Likhachev said Sunday that the “energy sphere” wasa likely to be the focus of any formal application by Russia against the EU within the framework of the WTO. Russian officials have repeatedly criticized EU energy legislation, which splits natural gas transmission networks off from producers, and maintain that it is targeted at Russian state owned gas giant Gazprom.

Russia joined the WTO after almost 20 years of negotiations in 2012, and is already locked in formal trade disputes with fellow members including the EU and Japan. 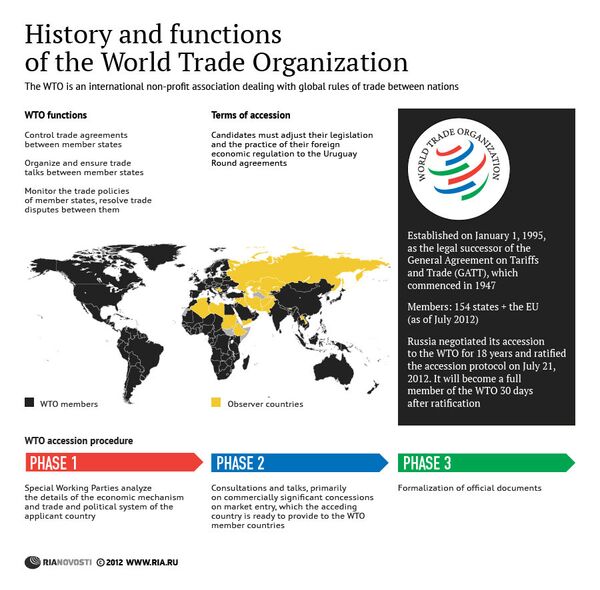 History and functions of the World Trade Organization
© RIA Novosti

The EU, which claims that Russia is illegally protecting its carmakers with a recycling fee on imported cars, became the first WTO member to use the international trading club to lodge an complaint against Moscow in July. Japan followed shortly afterwards, and the United States has said that it will also take part.

Relations between Russia and the EU have become increasingly strained within recent months ahead of summit in November that is expected to see the signing of a series of trade agreements between the EU and a group of ex-Soviet states, most notably Ukraine.